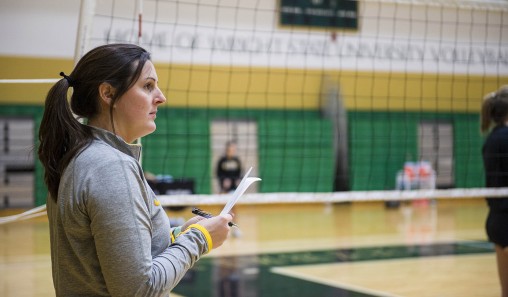 Volleyball coach Susan Clements, who comes from a coaching family, has coached volleyball for 11 years, including five years at Wright State. (Photos by Erin Pence)

“Coaching in all sports is a very time-consuming job. You have to have real passion and constantly be willing to educate yourself and be willing to share and educate others,” said Clements. “You will often sacrifice your own personal time, money and perhaps family to do the job the best you can. It is important to know it takes so much more than just knowing the rules and learning the terminology.”

Clements has coached volleyball for 11 years, including five years at Wright State. She also serves on the American Volleyball Coaches Association, representing the Horizon League, and works with mentoring programs.

Volleyball is a fall sport. During the off-season players practice and train. Depending on the day and time of year, Clements’ duties change. During off-season, she spends her mornings analyzing her student athletes during conditioning, critiquing form and providing advice on techniques. During the afternoon, she gives prospective players a tour of campus and the athletic facilities.

Recruiting athletes is not an easy task. Clements may spend her weekends attending high school tournaments scouting players. It requires a lot of resources, energy, time and communication. Recruiters cannot contact a potential athlete until their junior or senior year of high school.

The main thing Clements looks for is someone with a lot of character, energy, dedication and competitiveness, before checking the athleticism box.

“The main thing we look for is someone with our personality and vision because they’re an extension of us on the court,” she said. “And that’s when you meet with their club coaches and learn more about how they work, what kind of person are they, what do you know about them and go from there.”

During volleyball season, Clements is busy checking in with her 12 to 16 players, keeping them accountable for managing good grades, scheduling classes that fit their volleyball schedule, attending study tables and setting team and individual goals. 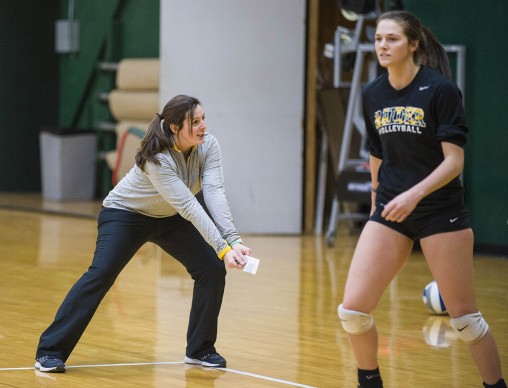 A rewarding part of coaching for Susan Clements is seeing her players grow and excel in their positions.

Jessica Thornton, a sophomore team captain who plays libero, called Clements the team’s “mom away from mom” and an amazing coach.

“My skills have improved a lot,” Thornton said. “She has helped me to become a vocal leader. She has made every skill and talent that I have shine through by working us hard mentally and physically. She genuinely cares about us as players and as people.”

On the court volleyball coaches listen for communication among players, along with observing their serves, skills and techniques. They will later review practice tapes to analyze areas in need of improvement.

“Coach Clements is the type of coach who really breaks things down for you. If you hit the ball out … she figures out what you have done wrong and makes you work on it,” said Haley Garr, a junior team captain who plays right side hitter. “I have improved not only as a player but a leader too.”

“We’re going to push you out of your comfort zone, push you through it, and it’s going to be tough, but we wouldn’t ask you to do something we don’t think you can do,” Clements said.

A rewarding part of coaching for Clements is seeing her players grow and excel in their positions. When that happens, she said, you can see the excitement on players’ faces. 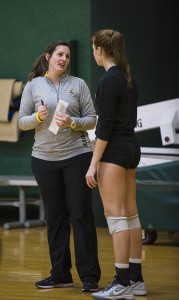 Student athletes balance the demands of coaches, professors, family, friends and of themselves. Working individually with athletes to create a cohesive team with diverse personalities is one of the challenges a coach must work through, Clements said.

“As a coach you can see the picture of the puzzle come together,” she said. “You have to make sure that their puzzle piece looks like yours … We’re there to help them make those good choices so that the puzzle piece that we see is what they can see as well.”

Wright State’s volleyball team isn’t all work with no play. Clements annually takes the team to a haunted house as a tradition. They also have a team retreat.

During the team’s recent retreat, Garr battled Clements in a dance-off. To Garr’s surprise, Clements had a few moves of her own.

“I thought I had the moves, but she kicked my butt,” said Garr. “She’s really funny and a great dancer.”

“The biggest memory has to be this August when we finally completed and unveiled the volleyball locker room,” she said. “To see the surprise and shock on our players faces was priceless and something I will never forget.”

Clements comes from a family of coaches, including her uncle, cousin and mother. Seeing the different personalities in a coach — from rough and blunt coaches to softer and approachable coaches —influence how she works with her student athletes.

“Growing up and seeing my mother not only coach but help players who came from a difficult childhood succeed or encourage a young person who may not have been the most athletic but found a relentless work ethic to become a great team player, were things I have also enjoyed experiencing as a coach,” said Clements. “Those moments are what can inspire a coach to continue on after difficult seasons or a have the longevity you see with coaches who have been in their sport for decades.”

“You have to have strong character and integrity to do what is right and not what is easy,” she said. “Being a coach is put on display for any and every one to see, critique and criticize. While many people only witness the two or more hours within a game or match a coach will spend countless hours working to improve their program, team, student athletes and themselves.”