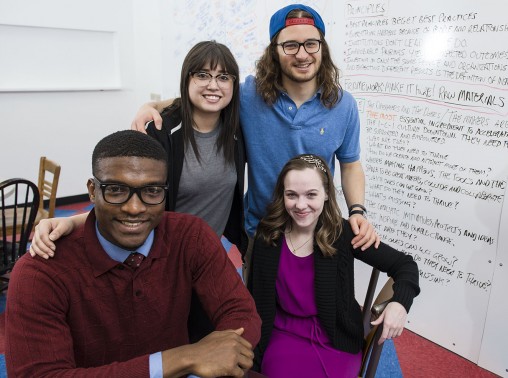 One need. Hundreds of hungry people. One idea. Over a dozen volunteers and college students.

Without help from staff or faculty or held accountable for a grade, a group of students, the majority from Wright State University, has created a mobile nonprofit social enterprise, the Dayton Mobile Market, to provide fresh produce to residents of Dayton food deserts.

The mobile market will serve as a mobile grocery store, aiming to provide and increase the amount of healthy and fresh produce to residents, in addition to providing community members with healthier recipes and nutritional education.

The market’s creators identified Dayton communities most in need as food deserts with a prevalence of fast food restaurants, liquor stores and convenience stores. The residents of those neighborhoods have limited access to stores that sell healthy and fresh produce such as lean meats, dairy and nonperishable products.

“We’re in the top 10 food deserts in the United States and that includes the Dayton Metro all the way to Troy, Ohio,” said Matt DeNuzzo, a Wright State graduate student studying social and applied economics who serves as co-director of the mobile market.

The creators hope to acquire and retrofit a bus to closer approximate a grocery store experience, reduce the travel time and prices for consumers, said Briana Snyder, a graduate student studying international and comparative politics who serves as co-executive director of the mobile market.

“I feel like this actually has an opportunity to benefit the community a lot,” said Nicholas Grothouse, an undergraduate economics major who serves as the market’s co-director of operations.

Grothouse has worked in downtown Dayton and has seen the needs of the people firsthand.

“I feel like with this, we actually have potential to change the Dayton area especially since it is in the nation’s top 10 food deserts,” he said. “You could tell there are not many good places to get food.”

The mobile market will launch this summer. Funds are currently being collected from private and corporate donations to finance the market’s first three months of operation.
Vanderbilt University in Nashville originally produced the mobile market concept. DeNuzzo decided that the city of Dayton needed an alternative food service similar to the Nashville Mobile Market. So DeNuzzo and Snyder first gathered friends and colleagues in October 2015, and the mobile market became an official nonprofit a month later.

“At school we read all these things about poverty and hunger, but the biggest thing is you have to do something about it if you want to see change,” said Tyler Feaver, a social and applied economics graduate student who also serves as the market’s co-assistant of research.

The team is working to earn the trust of the community.

“Communities aren’t used to a walk-up grocery store from a bus,” said DeNuzzo. “There is a trust issue with these communities because they’re used to being taken advantage of. So the idea of a bunch of college students with no ulterior motives but to say ‘hey we want to come and help you,’ we hope to communicate that to community leaders and church leaders.” 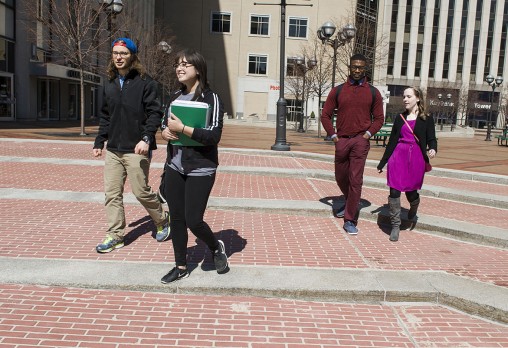 The students hope to have the Dayton Mobile Market ready to deliver food this summer.

“Many of the DMM creators look forward to interacting with the community and see the various aspects work out like economics and my passion to help people out in life,” said Charles Chiobi, a social and applied economics graduate student who serves as the co-director of community outreach.

Reaching the community through a mobile grocery store is not only a new idea for Dayton, but it is also sparking passion in students to help those in need.

“I’m just excited to see the statistics get better and take a step back and see that it all started with an idea,” said Aaron Blankenship, a social and applied economics graduate student who also serves as co-director of research.

DeNuzzo said, “Our plan is to operate until it’s no longer needed.”

The Dayton Mobile Market has worked with members of the Dayton community including the Wright State Master of Public Health Program, the University of Dayton’s Dietetics Program, UpDayton and Homefull.