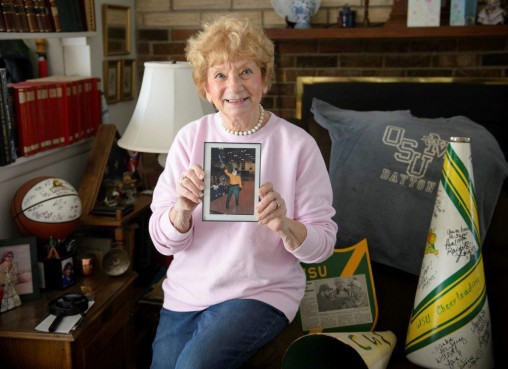 No one at Wright State University knew they were about to get a mascot. Well, one person knew. Andy Winchek. Because he was going to be it.

Winchek asked his wife, Vera, to sew him a uniform, copying it from a figure on a Wright State pin. And then Winchek just showed up at a Wright State basketball game in full mascot dress — mask and all.

“Everybody was running around saying, ‘Who is he? Who is he?” Vera recalled. “The athletics director looked up at him and said, ‘Andy, I know that’s you.’”

For the next six years following that game in the early 1980s, Winchek would be the university’s mascot. The students, fans and pep band so embraced him that he came to be known as “The Legend.”

Being Wright State’s first mascot was a lasting point of pride for Winchek, who also enjoyed a successful 45-year career at Wright-Patterson Air Force Base and along with Vera raised four handsome children in the couple’s Kettering home.

Five years ago, Winchek became seriously ill and later had to go on kidney dialysis. He died three years later at age 79 after suffering an intestinal infection.

“I was there when he passed away,” Vera said. “I held his hand.”

Now 82, Vera walks her Kettering neighborhood every morning and is often seen wearing something pink, her favorite color. On this particular day she is sporting a stylish pair of black high-top sneakers.

Vera grew up in Dayton and met Andy in the sixth grade when his family moved next door to hers. She remembers playing baseball and basketball with him in a vacant lot.

The two began dating their junior year at Wilbur Wright High School and married in 1953, a year after graduating. Andy began working as a messenger at Wright-Patterson. Vera worked at the telephone company making 97.5 cents an hour, more than her husband.

Andy enrolled at Wright State when classes were still being held at Roosevelt High School in Dayton. The Wincheks were passionate Raider basketball fans and would go to all of the games.

“All of these other teams are coming in with mascots, and Andy said, ‘We don’t have a mascot,’” Vera recalled. “He was just determined that Wright State was going to have a mascot.”

So Vera got busy with her sewing, fashioning an outfit that would fit her husband’s 6-foot-5 frame. Andy would later add a homemade megaphone and green Wright State University flag.

“On a basketball night — oh my goodness — he would come in from work and be ready to go,” Vera said. 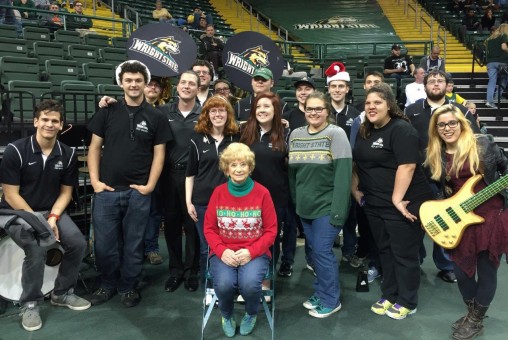 The couple would drive to the games, Andy dressed as the mascot. He would join the cheerleaders on the floor, catch them when they jumped into the air and help lead cheers from the students.

Over the course of one year, Winchek would cheer at the games and then go to work at 11 p.m. for the overnight shift. After Winchek’s stint as Wright State’s mascot, the mascot morphed into Rowdy Raider, a red-bearded Viking with a horned helmet, and then into a wolf.

Winchek graduated in 1969 with the university’s second graduating class, getting a bachelor’s degree in political science. He went on to get his Master of Business Administration at the University of Dayton.

He chose to continue working at Wright-Patterson and would later be sent for training at the Armed Forces Staff College in Norfolk, Virginia. He retired in 1998.

“He was so dynamic in everything he did,” Vera said.

The Wyncheks continued to attend Raider basketball games. And even when Andy was in failing health, he would walk over to members of the pep band to lead a cheer and acknowledge their chants of “Legend, Legend.”

The pep band later serenaded Vera at a game after she established a fund for the band in her late husband’s name.

The Legend lives on.