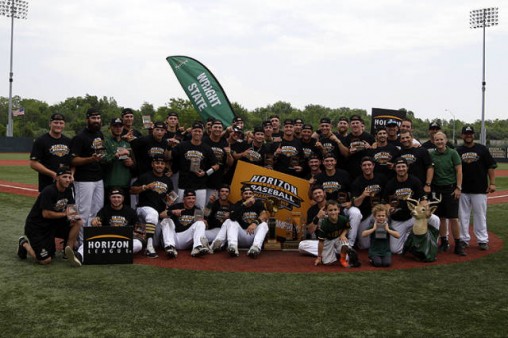 The Wright State baseball team is headed to Louisville, Kentucky, for the NCAA Regionals and will take on Ohio State in its opening game on Friday, June 3, at 2 p.m. at Jim Patterson Field at the University of Louisville.

The Raiders (44-15) are making their second straight appearance in the regionals, sixth in Division I and 13th NCAA appearance overall in program history. Wright State is also the #3 seed for the second consecutive year.

Wright State secured a spot in the NCAA baseball tournament by winning the Horizon League tournament.

In 2015, Wright State was the runner-up at the Champaign Regional. The Raiders dropped a 13-7 decision to Notre Dame in the opening game before eliminating Ohio 8-3 and Notre Dame 4-0 to advance to the finals. WSU then fell to host Illinois 8-4 in the finals.

Ohio State (43-18-1) won four games in two days to claim the Big Ten Tournament title, winning over Michigan and then Michigan State twice before rallying from an early 4-0 deficit to defeat Iowa in the title game 8-7. Wright State and the Buckeyes have met 40 times previously, with OSU hosting a 22-17-1 advantage. The two teams, though, have not played each other since Ohio State won 13-4 in Columbus on April 21, 2004.

Ticket information for the regional tournament will be released soon.