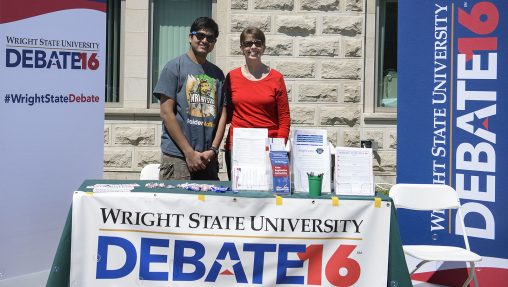 Graduate student Nathan Balasubramanian and Barbara Allbright, from the Office of Student Support Services, volunteered at the Debate information table during April Craze on campus.

With only four months to go before the first general election presidential debate is held at Wright State University, student excitement is mounting.

More than 1,850 students have jumped at the chance to apply for the ticket lottery to attend the debate or to volunteer.

“One of the biggest reasons why I volunteered for the presidential debate was the community service I would be providing my school and my country,” said Brittany Hart, a marketing major at Wright State. “With my father being retired military, my parents instilled in me a very strong sense of patriotism.”

Wright State was selected to host one of only four general election debates in the fall of 2016 where the final candidates will debate each other prior to the November general election. The debate is expected to be in the national and international spotlight and attract thousands of media members to campus.

Volunteers will be crucial to the success of the debate — before, during and after the debate on Sept. 26 in Wright State’s Nutter Center. It is anticipated that 300 to 350 volunteers will be needed for a variety of tasks, although a limited number of volunteer positions will have access to the debate hall.

“We’re making it our priority to encourage as many students as possible to enter the ticket lottery or apply for a volunteer opportunity,” said Kathy Morris, associate vice president for student affairs. “This is a once-in-a-lifetime experience, and we’re hopeful that Wright State’s role as host for the first presidential debate will inspire our students to participate in the process and vote on election day!” 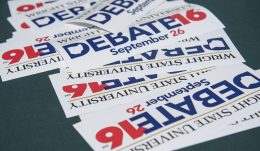 All tickets to attend the debate that Wright State receives from the Commission on Presidential Debates will go to Wright State students through the ticket lottery. The commission determines the debate format, audience size and number of tickets that will be available.

Wright State degree-seeking students who are registered for the fall 2016 semester at either the Dayton Campus or Lake Campus, at least 18 years of age at the time of application and in good disciplinary standing are eligible to apply.

“This experience, even if I do not receive a volunteer position, will be an incredible journey for the voters in this area, especially young voters like myself,” Hart said. “I believe this event will bring a sense of pride, confidence and patriotism to Wright State University.”