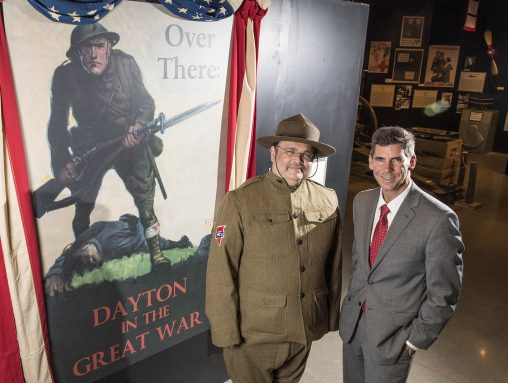 A 27-foot long, nine-foot high replica war trench complete with sandbags and wood framing greets visitors when they tour a new exhibition on Dayton’s role in World War I.

The idea is to put people in the trenches, said Brady Kress, Carillon Historical Park president and CEO.

“With everything that we do I always want to create some kind of experiential piece,” said Kress, who graduated from Wright State in 1996.

The trench is one of the unique features in “Over There: Dayton and the Great War,” a new exhibit organized by Carillon Historical Park with assistance by a Wright State history professor. The exhibit is open through November 2018.

Using diaries, letters, documents, photographs and artifacts, “Over There” showcases the essential involvement of Daytonians and local businesses in the war. Thousands enlisted and fought in Europe, businesses made unique and important contributions to the war effort, and the community emerged wealthier and larger.

“This is one of those exhibits that is the story of a city at war. We learned a lot about Dayton,” Kress said.

Dayton’s involvement in the war is greatly representative of middle America during this period, said Paul Lockhart, professor of history and the Brage Golding Distinguished Professor of Research at Wright State.

“All those things that tell the story of the United States in World War I are to be found in Dayton, and in particular Dayton contributed some genuinely unique things” to the war effort, he said. “The war made Dayton.” 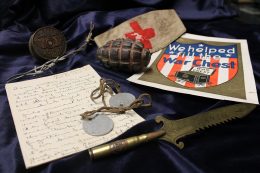 Through the Dayton-Wright Airplane Company, Dayton was the center of aircraft production in the United States. Maxwell Motor Car Company and Platt Iron Works produced two-thirds of the American-made tanks used during the war, leading one newspaper to proclaim Dayton the “tank center of the nation.” Local factories also produced gas shells, fuses, gun mounts, sights, tachometers and many other war products.

“Virtually every industrial concern in Dayton had given themselves over to war work,” Lockhart said. “The patriotic enthusiasm when the decision came to go to war was very much felt in the business community.”

Lockhart came up with the idea for “Over There” while planning a fellowship with Wright State’s Ohio Center of Excellence in Collaborative Education, Leadership and Innovation in the Arts (CELIA). His fellowship commemorated the 100th anniversary of the start of World War I.

He wrote the text on the display panels and developed an exhibition plan with Gwen Haney, community collections manager at Dayton History who curated the exhibit. Wright State War and Society graduate assistants Seth Marshall, Evan Mason and Cade Cover also contributed to the exhibit.

Lockhart described the two-year period in which the United States was in the war as transformative. It was America’s first venture as a world power, included a massive war effort at home, and saw the government tell citizens what to consume and manufacturers what to make and charge. The government also launched major propaganda campaigns to demonize the enemy. 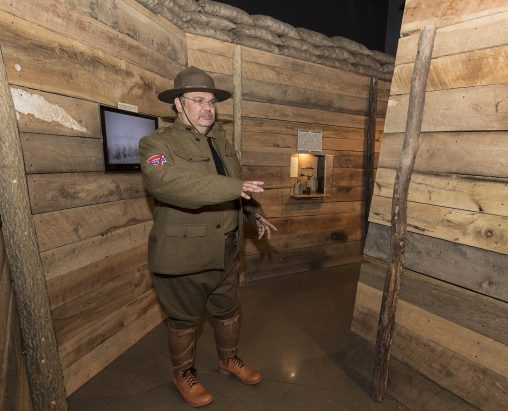 Dressed as a YMCA volunteer from World War I, Paul Lockhart shows off the exhibition’s replica war trench. (Photo by Erin Pence)

Dayton emerged from the war a larger and wealthier community, but also a less tolerant place, Lockhart said. Like much of southwest Ohio, Dayton had a large German population. Pro-German sentiments were suppressed, churches stopped holding worship services in German, the Dayton schools stopped teaching the language, and companies with German-sounding names changed their names.

“That’s something you see nationally but it’s amplified in Dayton because of the size of the German population,” Lockhart said.

The war also positioned Dayton to have a significant production role during World War II. “The war bolsters Dayton’s position not so much as an industrial city but as high tech city,” Lockhart said.

“Over There: Dayton and the Great War” features an original Lewis Machine Gun, 835-pound field gun with a seven-foot cannon barrel, a reproduction wartime ambulance, original World War I uniforms and numerous war memorabilia and photographs.

The exhibition features poignant profiles of a number of Daytonians who served during the war. One soldier, Edward Keever, served as an ambulance driver and then in the Army tank corps and wrote about the war in a novel, “Shorty in the Tank Corps.”

“There’s nothing especially remarkable about any of them, which is kind of the point,” Lockhart said. “They are ordinary folks who went through something extraordinary.”

Through uniforms, artifacts and photos, the exhibit also profiles Army units that had strong Dayton connections, including the 134th Field Artillery, 148th Infantry and 322nd Field Artillery. One featured company consisted of African-American men in the Ohio National Guard in the 372nd Infantry who fought under French command. 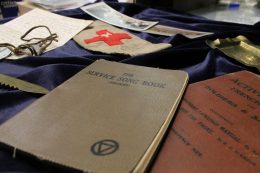 A wall of posters shows the government’s numerous propaganda efforts. Posters tell citizens to save food, donate books to soldiers and view the Huns not just as the enemy but also as monsters.

To help the exhibit best tell the story of Daytonians’ involvement in the war, Lockhart, Kress and Dayton History solicited items from the community. “We got some really remarkable collections of letters, photographs,” Lockhart said.

Lockhart said it was thrilling to watch the exhibit “go from idea to outline to map to actual physical display.”

“I have six books in print, and this is the most fun I’ve had producing anything,” he said.