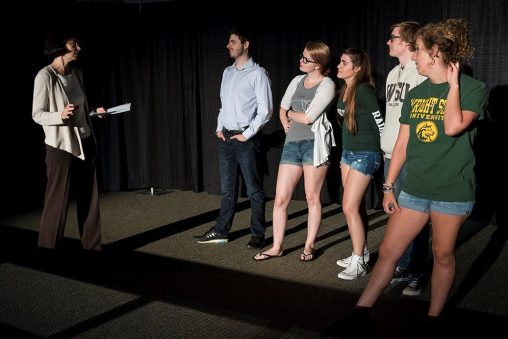 One is a popular, high-achieving student from a local high school. One is a musician majoring in engineering at her parents’ insistence. One is a baseball player using college as a stepping stone to the pros. And one is a military veteran who has been deployed three times.

Williams was invited to Wright State to work with the College of Science and Mathematics and Department of Theatre, Dance and Motion Pictures to produce sketches that will be shown to freshmen attending Raider Academy.

Raider Academy is a new two-week residential summer program designed to give incoming freshmen skills for success by introducing them to Wright State academics, campus resources and the university community. The academy is in session from June 13 to 24.

Instead of the students receiving some of the information in a lecture-type format, they will watch sketches acted out by the theatre students.

The sketches are designed to highlight certain issues the students may face.

One scenario will include students who show up for a tutoring session, one of them totally unprepared and uninterested. Another sketch will portray students who fail to take advantage of faculty office hours in order to enlighten them about available resources.

The sketches will stop just short of showing the outcome. The students will then be broken into smaller groups to identify the issue and come up with strategies to address it.

“The actors will then take the stage, rewind the scene and then go forward using the strategy selected by the group,” said Williams.

Kathrin Engisch, interim dean of the College of Science and Mathematics, said the program is a powerful way to get the incoming freshmen to tackle issues they may encounter in transitioning to college.

“They are going to be thinking about trying to help the characters,” said Engisch. “Then solutions will get internalized and be available when they themselves face the issue.”

The sketches were first performed on June 22. Additional sketches will be performed Thursday, June 23, at 7:15 p.m. and Friday, June 24, at 12:30 p.m. in the Student Success Center auditorium. They are open to the entire campus community.

One sketch will introduce four vastly different Wright State students to the audience and follow them through orientation, winter break and the end of the academic year, with the characters narrating their journeys.

“The idea is that all four will have transformed completely by the end of the year for whatever reasons — not necessarily all negative or all positive,” said Williams. “Things will have happened that will make these people different by the end of that first year.”

Williams, who taught acting at Virginia Tech, is also a former member of The Second City, an improvisational comedy theater company in Chicago.

“The sketch writing and the vignette writing is very similar to what we did in our process of creating comedy,” said Williams. “You get on your feet and you play and you improvise and improvise until one of those things really hits the point like you need it.”

Williams began using the model for interactive training in the 1990s with corporations. This is the first time he has done it at a university.

“I didn’t realize it was working until I was watching people break down in these trainings,” he said. “I realized it was much easier for people to empathize with a character before they took the responsibility of behavior for themselves.”

Williams said the training is effective because of the team-building and student-to-student elements.

“These students don’t want to hear from old folks like us,” he said.

Williams met with the Wright State theatre students — volunteers from an improv class — and had them read drafts of the scripts. The scripts were then rewritten, edited and rewritten again.

The first script-reading session was electric, with the students becoming more and more animated. An excited Williams paced the room as the scripts were read.

Theatre students Brynnan McNeill, of Louisville, Kentucky, and Danni Hepp, of Columbus, Ohio, said they relish the acting experience and helping the students.

“I feel that we have this chance to introduce them into what life here is like, and not just the academics,” Hepp said. “And that’s just a really cool opportunity.”

“If we can take away just a little bit of the fear of coming here — it can be scary, but it’s really not that scary — that’s a huge benefit,” added Kyle Carey Miller, of Lexington, Ohio.

Ian Patrick Ashwell, of Cincinnati, sees it as a chance to give the students new ways to approach situations they may never have thought of.

“I just like the fact that we are using what we are good at,” said Emily Chodan of Columbus, Indiana. “We like to get up in front of people, we like to act, and we like to be funny. If we can use those talents for a cause — the fear of coming to college, which we all experienced — I think that’s a really beautiful thing.”