If it could speak, it would tell of being attached to the butt of a British rifle fired by a Shawnee Indian at American troops during the largest Revolutionary War battle in Ohio.

The partial brass plate — hand-engraved with a bow, arrow and quiver — was unearthed in June by a Wright State University anthropology student doing battlefield excavation work at the site of the Battle of Piqua.

“I was actually stunned,” recalled archaeologist Lance Greene, the assistant professor overseeing the dig. “As soon as I saw it, I knew it was Revolutionary War period. And once we started cleaning it off and looking at the engraving, I was really just flabbergasted. … When you find this specific, really interesting sort of artifact that is unusual and tied to the Shawnee occupation, it really is exciting.” 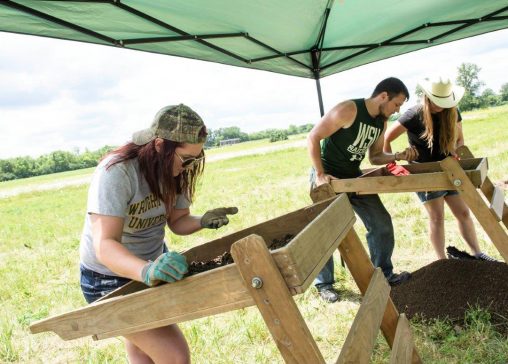 Wright State students sift soil looking for artifacts as part of a dig at the site of the Battle of Piqua. Organized by archaeologist Lance Greene, the excavation is part of a program that investigates the archaeology and history of Shawnee settlements in Ohio. (Photos by Erin Pence)

At Wright State, Greene created a program to investigate the archaeology and history of Shawnee settlements in Ohio. The students enrolled in his Field School are undergraduates. Most of them are majoring in anthropology and many are interested in becoming archaeologists.

Piqua, also known as Peckuwe or Picawey, was a Shawnee village of about 3,000 established in the mid-1700s near the Mad River in what is now southwestern Clark County, just northeast of Wright State.

The village and British-style stockade were attacked by a Kentucky militia of 1,100 led by George Rogers Clark on Aug. 8, 1780. The rifle-toting Shawnee were aligned with the British, who had some soldiers at the battle.

The militia reported killing about 40 Shawnee, burning all of the houses to the ground and destroying 800 acres of corn.

The heart of the battlefield is a grassy, 30-acre meadow, but the fighting took place over several miles.

“We’re looking for both evidence of the battlefield and the Shawnee village,” Greene said during excavation work in early June.

The students did “test unit” excavations, digging in one-square-meter sections to control horizontal and vertical spaces. 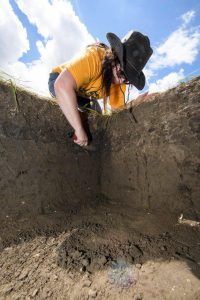 They used skim shovels and metal trowels to scrape the soil into orange plastic scoops, which were emptied into buckets. The soil then went into wood-framed sifters and was hand-shaken through a screen, raising a clatter and leaving artifacts or fragments behind.

Greene checked in at the various excavation holes, observing the working students and answering questions.

“I would definitely bag that,” he tells a student who unearthed a mysterious fragment.

In addition to the brass plate, the students found musket balls, arrowhead flakes, pottery fragments and nails made by blacksmiths.

The brass plate would have been attached to a Brown Bess, a smooth-bore, muzzle-loading 75-caliber gun sold to the Shawnee by the British. The bow-and-arrow designs were engraved into the plates by the British in order to make the rifles more appealing to the Shawnee.

One of the lead musket balls found by the students had never been fired and was perfectly spherical.

“A lot of times during the battle, you would be loading your gun so fast and be in a panic mode and drop a bunch of the balls,” said Greene. “So it would land at your feet and never be fired.”

The student archaeologists’ uniform of choice included hats, sunglasses and gloves. Tape measures, foam kneepads and spiral notebooks were also among the trappings.

Miriam Wilkins, an anthropology major from Dayton, said the students were careful to avoid damaging any artifacts they unearthed.

“If you come across an artifact that is a piece of pottery, it can break very easily,” she said. 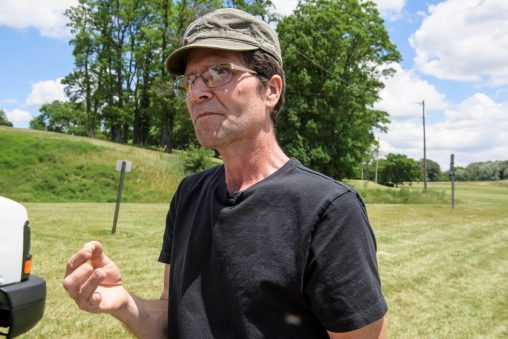 Wilkins said she enjoys the camaraderie and the thrill of not knowing what might be unearthed.

“Uncovering things and putting together the puzzle,” she said. “That’s the most exciting thing about it.”

Rocks can make digging a little difficult, she added. And she’s no fan of the ticks, which made a nuisance of themselves during the dig.

Joshua Keeton, an anthropology major from Chillicothe, became interested in archaeology after enrolling at Wright State. He currently works at SunWatch Indian Village near Dayton and hopes for a museum-related career.

“Just the knowledge that there are pieces of history buried out here that we can tell the story of people that came before us and be able to give voices to them,” Keeton said. “And it’s just right under our feet.”

The students took their finds back to Wright State, where the artifacts were washed, processed and analyzed in the anthropology lab. In about a year, the artifacts will be returned and permanently curated at the battlefield museum, which is next to George Rogers Clark Park.

Greene would like to bring another team of student archaeologists back to the battlefield next year and use ground-penetrating radar to find artifacts. He is hoping to find a burned Shawnee house.