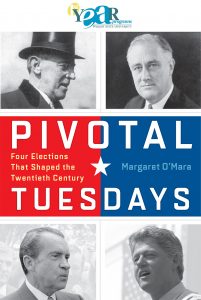 A book that looks back at four U.S. presidential elections that changed the course of the last century will be in the hands of thousands of first-year Wright State students as the university prepares to host the first general election debate.

“Pivotal Tuesdays: Four Elections that Shaped the 20th Century” by Margaret O’Mara is this year’s Common Text, which will be distributed to students this summer during Orientation. The goal of the Common Text is to give students, as they arrive at college, a shared academic topic or discussion point so they all have something in common they can discuss with an academic community.

The Common Text program, which was first selected for the 2003-04 school year, must have a theme that resonates with first-year students, must be applicable in a wide variety of courses and must be able to be connected to service-learning opportunities. In the past, the Common Text has been used in first-year seminar and English courses.

Wright State will host the first presidential debate, on Sept. 26. The debate is expected to be in the national and international spotlight and attract thousands of media members.

Donna Schlagheck, professor emerita of political science who led the effort to land the debate at Wright State, said students who read the book will be significantly better prepared to watch and analyze the debate.

“A true scholar and a fine writer, author Margaret O’Mara offers an accessible text which will undoubtedly provide this year’s entering class a real context in which to understand the current spectacle of the presidential-selection process,” said Schlagheck. “The Common Text will enrich the broader spectrum on which students understand this political system and its interaction with the social system.”

O’Mara will speak at Wright State on Nov. 2 in the Apollo Room of the Student Union beginning at 7 p.m. Part of the Presidential Lecture Series, the event is open to the public and includes a question-and-answer session and a book signing. O’Mara will also help kick off Wright State’s Big Read event on Nov. 3, in which the campus community will read “Pivotal Tuesdays” in its entirety in one day.

“Pivotal Tuesdays” explains how the 1912 race between Teddy Roosevelt, William Howard Taft, Eugene V. Debs and Woodrow Wilson grappled with how to respond to changes in industrial capitalism. It shows how Franklin Roosevelt’s promises of a New Deal to overcome the Great Depression helped him defeat incumbent Herbert Hoover in the 1932 election. It details how the 1968 election of Richard Nixon reflected a nation divided by war and race and analyzes the three-way race that led to Bill Clinton’s victory in 1992.

Propelled by barnstorming tours and the skillful use of media, the candidates of 1912 sidestepped traditional party organization and brought their appeals directly to voters.

“The 1912 election was one where a consensus emerged that a government should do more than deliver the mail and have a standing army. It should protect workers, regulate markets and ensure basic freedoms,” writes O’Mara.

As a result of the 1912 election, Theodore Roosevelt enlarged the prominence of the presidency and expanded the powers of the executive branch.

“Roosevelt’s oversized personality helped create a new template for the modern presidency, a role that demanded a leader to be both policy-savvy and paternal, commanding and charismatic; powerful and populist,” O’Mara writes.

The failure of capitalism in 1929 and the years that followed opened American leaders and voters to new ideas. The 1932 election — shaped by stagecraft and a new breed of campaign advisers — set the stage for the federal government having a much larger presence and elevated the importance of the personal connection of the president.

“Roosevelt and the men and women of his administration — as well as their allies in business and labor — did manage to stake out a profoundly new role for the government based on the premise that the state had a responsibility to ensure basic economic security for its citizens,” O’Mara writes.

During the campaign for the 1968 election, won by Nixon over Hubert Humphrey, Americans on both the left and right were questioning mainstream “big” party politics.

African-Americans, women, gays and lesbians, and other minority groups had more prominent roles in the Democratic Party, but the Democrats had lost the establishment power they had enjoyed from the New Deal through the Lyndon Johnson years. Meanwhile, the Republican Party had found a new way to talk to voters and had made inroads into critical parts of the old Democratic base.

The 1992 election, won by Clinton over George H. W. Bush, was the first presidential race after the end of the Cold War and the first to feature a candidate born after World War II. It happened at the cusp of the high-technology revolution and was the first campaign driven by and possibly decided by the all-consuming media environment of cable television. It also hinged on the insurgent third-party candidacy of businessman H. Ross Perot, whose campaign reflected the growing power of the independent voter.

“The popular success of the erratic and iconoclastic Perot attested not only to the power of new media to bypass and disrupt campaign narratives, but to the deep dissatisfaction American voters had with both major parties and with the political system itself,” O’Mara writes. “The Democrats’ rightward tilt, the cable news spin cycle and relentless demand for campaign cash all defined 1992 as a pivotal election.”