Ri Molnar is a “chronic volunteer” and readily admits it.

But Molnar’s most time-consuming act of giving is the Pay It Forward Farm, a community supported agriculture program that grows and delivers organic vegetables “with a side of anti-capitalism.”

Molnar, Molnar’s parents and cousin Anna grow the vegetables in a plot on the family’s five-acre Il Girasole (Sunflower) Farm in Sugarcreek Township. Molnar, the lead farmer, is certified in permaculture, a system of agricultural and social design principles that use patterns and features in natural ecosystems.

The vegetable plot is a sprawling sea of green. Garden hoses snake along the rows. Molnar picks their way through the plants, snipping off leaves of kale and filling a basket. Chirping crickets and dancing butterflies complete the scene. 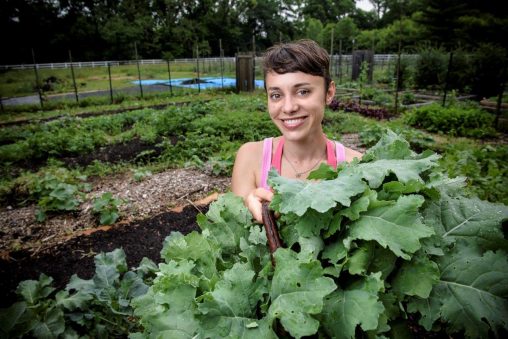 Planting the garden is a lot of work. Building the beds in May is the most labor-intensive part. And as the soil compacts, wheelbarrows of composted manure have to be brought in.

Produce from the farm is currently made available to about 30 people from Dayton, Centerville, Waynesville and Yellow Springs who pre-pay for the year.

“Every week they get a box of whatever is in season,” said Molnar. “We do a sliding-scale fee to accommodate multiple incomes, even starting at zero.”

Molnar said the families who pick up the produce are pleased with the quality.

“I get text messages all the time showing me pictures of their dinner,” Molnar said. “‘Oh my gosh. My daughter ate spinach,’ one text said. ‘This has never happened before. She asked for seconds.’”

Some of the vegetables are donated to a senior-citizens group of 10 at the Dakota Center in west Dayton. Weekly deliveries are made there.

Molnar spent much of her childhood in Ft. Wayne, Indiana, the daughter of an engineer father and a nurse practitioner mother. Molnar became interested in their parents’ garden as a child and was mentored in gardening by their aunt.

“When my aunt passed on, gardening became a way of continually connecting with her,” Molnar said.

Molnar attended Antioch College in Yellow Springs for two years, majoring in women’s studies and ecology. They then took a break from college to do a little adventuring. They hopped on a motorcycle and rode to Flagstaff, Arizona, where earlier they had done a co-op stint as part of the Antioch curriculum.

“I met this amazing radical feminist group that was doing grassroots organizing. It felt like the things I was studying I could live in real life and be supportive of,” Molnar said. “And then I got invited to be part of this dance company. It was just this magical thing.” 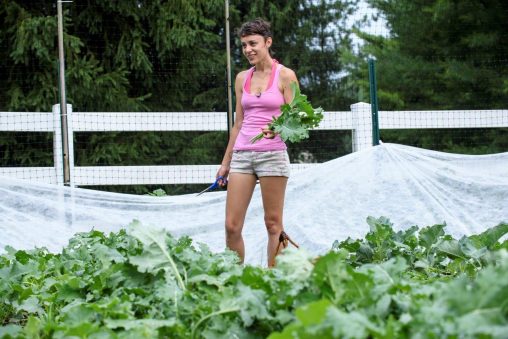 Ri Molnar is majoring in Spanish to increase their access to the Hispanic community, do some interpreting and work in social services.

Molnar enrolled at Wright State nearly two years ago and is majoring in Spanish. They want to use the language to help the Spanish-speaking community gain greater access to social services through interpreting.

Molnar has volunteered for Conversation for Change, a joint program with the Dayton Mediation Center and East End Community Center that connects people with rehabilitation services, counseling and financial aid. They hold leadership positions with SURJ, Showing Up for Racial Justice, and with Black & Pink, a group that supports LGBTQ prisoners and works toward eradicating prison violence against them. They also work for a Dayton group called STRONG, which helps children and teens who have suffered trauma.

In addition, Molnar works as an office assistant for the Wright State Retirees Association, which is devoted to serving the needs of the university’s more than 1,100 retires and providing opportunities for continuing service to the university.

“They are so appreciative of my work, and everybody is very nice,” Molnar said. “It’s also really cool to learn how Wright State was in the past versus how it is now. They’re very involved.”

Molnar said that as a nontraditional student, they found Wright State very supportive in helping them navigate the school’s academic offerings and financial aid.

Favorable weather and other factors have made the fourth season of the Pay It Forward Farm its most productive. Molnar would like to see more people take advantage of the produce.

“It’s such a labor of love,” Molnar said. “Sharing food is such a beautiful gift.”

Molnar will start collecting membership in March, but people are welcome to get in touch before then through email or Facebook.