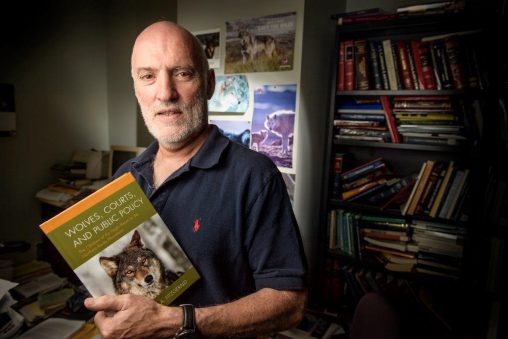 “Wolves, Courts and Public Policy: The Children of the Night Return to the Northern Rocky Mountains” by Wright State political science professor Edward Fitzgerald assesses the impact of public law litigation in the reintroduction of the gray wolf. (Photo by Erin Pence)

In the 1931 movie “Dracula,” actor Bela Lugosi hears the howling of wolves outside and says, “Listen to them. Children of the night. What music they make!”

That reference is used by Wright State University political science professor Edward Fitzgerald in the title of his new book, which examines the important role of the courts in protecting the wolf from its human predators.

“Wolves, Courts and Public Policy: The Children of the Night Return to the Northern Rocky Mountains” assesses the impact of public law litigation in the reintroduction of the gray wolf.

“If you look at the success of the wolf recovery program, the courts have been very instrumental in allowing that program to go forward,” Fitzgerald said.

The book is the latest academic literary endeavor by Fitzgerald, who joined the faculty at Wright State’s College of Liberal Arts in 1986.

Fitzgerald grew up in suburban Boston, graduating from Revere High School. He got his bachelor’s degree in political science from Holy Cross and a law degree from Boston College.

But after graduating from law school, Fitzgerald decided he wanted to pursue teaching, on the college level.

“I always knew I wanted to be a professor,” he said. “And I’ve never been disappointed in my choice of professions.”

After teaching at Saint John’s University in Minnesota for three years, Fitzgerald joined the faculty at Wright State. He is teaching an array of law courses this year, including “Civil Liberties II,” “Criminal Law,” “Criminal Procedure” and “International Law.” He has also taught environmental law, natural resources law and bioethics in law.

“I’ve had support to travel, to do research,” he said. “Wright State has been very supportive of my efforts. I’m glad to be here.” 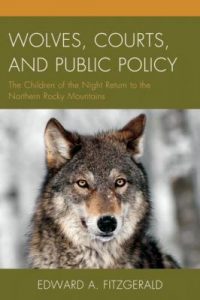 Fitzgerald had been looking for an issue at the intersection of law and politics to write about and began to investigate the practice of reintroducing wolves at Yellowstone National Park. He wrote several articles about it and pretty soon had a book.

“As you study the issues, you try to place the arguments in an academic or theoretical framework and go forward from there,” he said.

Wolf eradication in the West began after the Civil War. Pressure brought by the livestock industry and hunters prompted the federal government to establish a predator control program that drove the wolf to the brink of extinction.

“In a general sense, what the book is about is the important role that the courts play in the public policy process,” Fitzgerald said. “The courts have a very important role in interpreting the Constitution, interpreting statutes and through their interpretation deciding whether the government is conforming with what the law actually requires.”

The gray wolf was reintroduced into the Northern Rocky Mountains through the Carter through Clinton administrations. In 2012, Congress removed the gray wolf from endangered species status in most of the region and blocked any judicial review.

“The premature delisting of the NRM (Northern Rocky Mountain) wolves by Congress undermined the ESA (Endangered Species Act), which mandates that decisions be based on science, not politics,” Fitzgerald writes.

Fitzgerald says that over the years the courts have been instrumental in protecting the environment.

“I think the general public is not quite aware of how important the courts are in the role of American government,” he said. “This book demonstrates how important that is.”