The gift will be used to support student success programming and operations in the university’s Student Success Center, which opened to students in June 2015.

“We are so grateful to John and Shirley for their incredibly generous support of our students,” said Wright State University President David R. Hopkins. “They clearly share our commitment to helping every Wright State student succeed.” 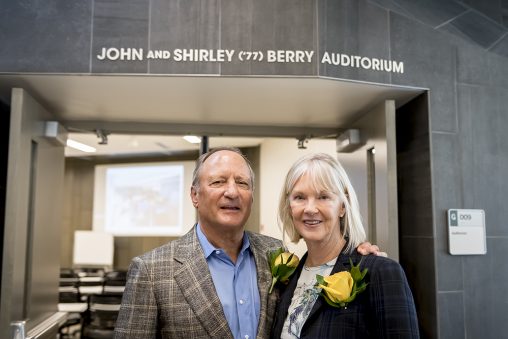 In appreciation of the Berrys’ gift toward student success initiatives, Wright State named the 220-seat auditorium in the Student Success Center the John and Shirley (’77) Berry Auditorium. (Photos by Will Jones)

“I’m just real proud that we can do this for Wright State,” said Shirley Berry, who graduated from Wright State in 1977 with a Bachelor of Science in Education. “It makes a big difference in people’s lives whether they have a degree or not.”

Shirley and her husband, John, were interested in supporting Wright State’s student success initiatives, because they provide help for students early on in areas where they may be struggling. These support services are especially critical at Wright State, a university that welcomes a diverse group of students from all backgrounds and walks of life.

“Wright State’s really unique with their programs to help students graduate,” said John Berry, retired president of The Berry Company in Dayton. “Some of the students who go to Wright State might not be as prepared as other students. Having a Student Success Center is very, very meaningful.”

The Berrys hope their gift helps increase the odds that more students will graduate instead of getting frustrated and quitting school. “It just might give them the courage to continue on,” said Shirley.

In appreciation of their gift, the university named the 220-seat auditorium in the Student Success Center the John and Shirley (’77) Berry Auditorium. 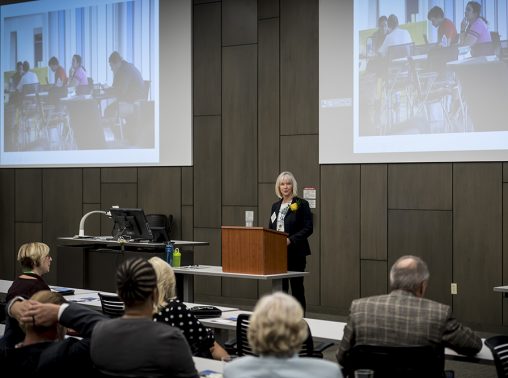 Shirley and John Berry wanted to support Wright State’s student success initiatives because they provide help for students early on in areas where they may be struggling.

With her gift, Shirley Berry joins 14 other Wright State alumni who have each contributed $1 million or more to Rise. Shine. The Campaign for Wright State University.