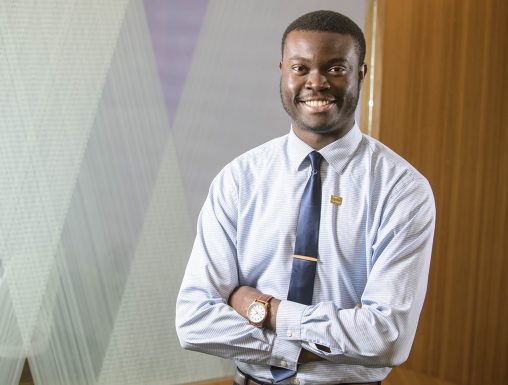 Graduate student Dubem Obianagha came to Wright State from the African nation of Nigeria to pursue a dream of becoming a doctor. (Photo by Erin Pence)

What once was a dream has now become a reality for Wright State graduate student Chuckwudubem “Dubem” Obianagha, who came to Wright State from the African nation of Nigeria.

Obianagha said he dreamed of coming to the United States but didn’t know how or when that would happen. He finished high school and then attended the University of Nigeria for his undergraduate degree in zoology.

“As a kid, I wanted to be in medicine, but there was little opportunity to cultivate the interest,” Obianagha said. “As I was growing older I became engrossed in medicine and health care. I would ask myself, ‘what else could you do with your life besides this,’ and I couldn’t see myself doing anything else. I have a deep desire to be part of and change the health care system in the States or in Nigeria.”

He plans to become a pediatrician.

At 21, he decided to apply for the Diversity Immigrant Visa Program, which accepts millions of applications annually from countries with low rates of immigration to the United States. However, only approximately 15,000 of these individuals are chosen annually.

To Obianagha’s surprise, he was one of the selected few and knew his life was about to change.

“At this point, my life felt like an amazing Hollywood production and the playback was on fast forward,” he said. “It was all so exciting, and I just felt — in fact, I knew — that I was at the beginning of my most epic adventure, the kind we all wait for and hope that one day we can begin.”

Obianagha and his family were excited at the thought of pursuing his goals in another country. They knew of the challenges to come but that the challenges would be worth the time of him being away. He grew up with his mother, three brothers and one sister.His father passed away nine years ago. His parents are his role models.

“I was more excited than afraid,” he admitted. “My family was also excited for the opportunity, but at the same time it was difficult for them to think of a life without seeing me every so often. But we all knew that it was going to be worth it.”

Because the Nigerian and U.S. college degree systems are different, he completed 90 credits of additional undergraduate courses and two master degrees, earning an MBA in management, innovation and change and a master’s degree in public health in health care policy and management within five years.

He is currently a post-baccalaureate candidate applying to medical schools.

“I have seen the prospects that I have and I believe I can get to where I want to be,” he said. “So I got to keep pushing to get where I want to be. It’s always beautiful when you get to that point and take a deep breath and say, ‘yes, I did it.’”

After coming to the United States, Obianagha realized that the Nigerian school system had not fully taught him the interpersonal skills and critical thinking he would need in the U.S. system. But he has flourished using his strong work ethic.

He said students in Nigeria typically study long hours from 1 to 5 a.m. at their schools and then go home to eat and shower, return to school and sleep in the evening. He has replicated this routine at Wright State, helping him earn a 3.97 GPA in his graduate public health program.

“It’s about how hard-driven you are,” he said. “I’ve already worked so hard to get to where I am now and even though I understand there will be many obstacles in the way of me becoming what I want to be, a medical doctor. … I still feel like if I’ve come this far why not go all the way?”

Obianagha’s determination and work ethic have pulled him out of poverty and up the ladder toward becoming a doctor. He is also in the process of becoming a U.S. citizen.

“I’m very appreciative of my background and growing up with little,” he said. “My parents taught us to never settle and go all the way. It may seem very difficult, but you’ve got to just keep pushing.”

Obianagha travels abroad through school and mission trips to treat people in the countries he visits and to learn how their country manages health care. He taught health education and social justice in Tanzania, learned in the United Kingdom how they adopt health policies and studied Switzerland’s social justice system.

He is grateful that his hard work has paid off.

“It just marvels me to see how far I’ve come,” Obianagha said. “It also gives me the opportunity to respect people like me and to teach people who have had it easy growing up that ‘life isn’t this easy. You’re privileged to have all the things that you have, but trust me, there are a ton of people out there who don’t have a small amount of what you have.’”