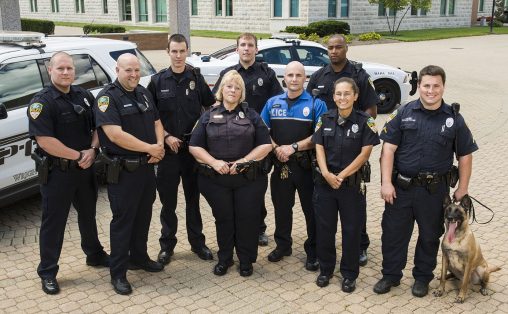 In an instance, everything can change.

That’s why Wright State University’s Police Department recently trained for an event of an active shooter on campus.

Thirteen officers participated in the training. The trainings are conducted twice a year in the fall and spring.

“Wright State’s Police Department conducts active shooter training to create a consistency of response to active shooter incidents,” said Lt. David Cox. “This training helps ensure that officers are familiar with response tactics, assessing the situation as well as to train with other outside agencies.”

Eight staff members from Wright State’s Residence Life and Housing participated in the training as role players of victims and bystanders.

“The role players added a higher level of realism to the training as officers and EMS had to deal with rescuing victims, caring for the injured, getting information from the bystanders on where the shooter was at and at the same time getting them out of the building,” said Cox.

The role players were also able to provide feedback for handling and managing victim care or encountering circumstances where there are multiple victims or witnesses.

“Additional goals of these trainings is to help review and update incident action plans, response tactics and integration of the Rescue Task Force to the response,” Cox said.

In the event of an active shooter on campus, Cox said students, staff and faculty have several options, including running away or escaping from the area, or hiding and locking down their current location if escaping is not possible.

If the threat is taking place at their current lockdown location, Cox said individuals could fight back and follow directions from first responders.

More information about what to do in the event of an active shooter is available on the Wright State Police Department’s website.