“Going tobacco free promotes a healthy environment in which to learn, work and live, for our students, faculty, staff and visitors, and also better prepares our students for the workplace of today,” said Hopkins.

Wright State started to investigate this initiative almost five years ago with a task force comprised of faculty, staff, and students, as well as Public Health – Dayton and Montgomery County. After careful review, many surveys and campus discussions, Wright State will become tobacco free. 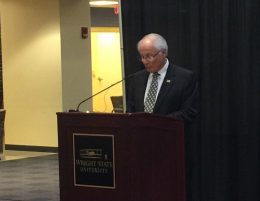 During an event in the Student Union, Wright State President David R. Hopkins explained why Wright State will become tobacco free on July 1, 2017.

This is a very proud moment in the history of this great university, and I think we will look back on this day and this announcement as the beginning of the change in the culture that will bode well for future generations that come to Wright State,” said Hopkins.

In July 2012, the Ohio Board of Regents (presently known as the Ohio Department of Higher Education) recommended that all Ohio public universities become tobacco free. To date, eight other four-year schools in the Inter-University Council of Ohio are tobacco free or have announced plans to become tobacco free. Wright State will be the ninth.

It joins more than 1,400 tobacco-free campuses across the country.

“We know that 99 percent of all regular smokers started before the age of 26 and many started while in college,” said Lukas Wenrick, president of Wright State’s Student Government Association. “It’s our duty to take action on this damaging health concern for our community,” he added.

“Today is significant for Wright State University today because of the devastating impact tobacco continues to have on our community,” said Bruce Barcelo, healthy lifestyle supervisor at Public Health – Dayton and Montgomery County and a Wright State graduate. “The encouraging, hopeful news is that smoke-free policies like the one Wright State University has announced today is shown to impact a smoker’s willingness to quit.” 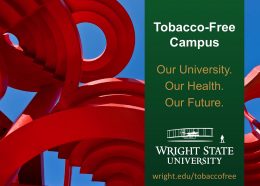 The policy also applies to off-site buildings and grounds that are solely leased or occupied by Wright State University. It applies to anyone on campus including students, faculty, staff, visitors, consultants, vendors, patients, volunteers and contractor employees.

Cessation gum, patches or other cessation products approved by the U.S. Food and Drug Administration will be allowed.

Hopkins emphasized that Wright State is committed to assisting smokers and tobacco users who want to quit using tobacco products. The university is currently designing cessation programs for employees and students at both the Dayton Campus and Lake Campus locations.

Reports by surgeon generals for almost 50 years indicate that there is no safe level of cigarette smoke and that tobacco is the leading cause of preventable death and disability in the United States. Furthermore, tobacco products are a leading cause of fires and campus litter.

“With our tobacco-free campus, Wright State is proclaiming loud and clear that we will not produce another generation of leaders who are subjugated to the same health problems as the last,” Wenrick said. “We will be the generation that ends smoking.”