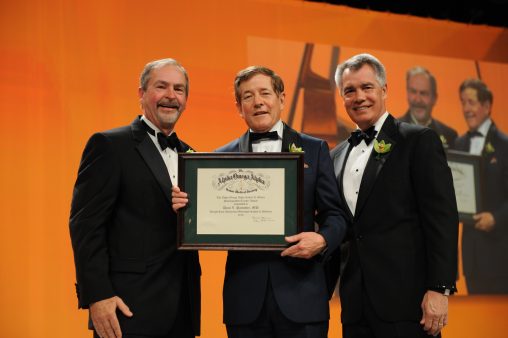 A Wright State University Boonshoft School of Medicine professor and administrator was one of nine individuals and one institution honored for their outstanding contributions to academic medicine at an Association of American Medical Colleges (AAMC) awards presentation on Sunday, Nov. 13, during the Learn Serve Lead 2016: The AAMC Annual Meeting in Seattle.

Parmelee has been an early pioneer of team-based learning (TBL) and medical education innovation for more than three decades. In 2001, he joined the Boonshoft School of Medicine as associate dean for academic affairs, where he partnered with colleagues to transform the largely passive curriculum into one that engages medical learners.

He has been instrumental in the design and implementation of many TBL modules incorporated throughout the medical school’s curriculum. He also has worked to develop curricula that underscore the healing and compassionate qualities of physicians. He helped implement and continues to teach in the Healer’s Art course, designed by Rachel Remen, M.D., an elective in which almost 80 percent of first-year medical students enroll.

Parmelee is a well-known champion for active learning techniques at the Boonshoft School of Medicine and beyond. He served as the inaugural president of the Team-Based Learning Collaborative, a national not-for-profit group that promotes TBL in higher education. He is a widely published scholar on active learning, authoring and coauthoring many book chapters and peer-reviewed articles. He also has edited two textbooks on TBL, including “Team-Based Learning in Health Professions Education,” which has been translated into several languages.

With his expertise in active learning and academic administration, Parmelee also was instrumental in establishing a medical school in Saudi Arabia and has served as a consultant faculty developer to institutions in the Middle East, including Iran; Southeast Asia; Africa; and more than 30 states in the United States.

In addition to his support of students and active learning strategies, he is an equally committed advocate and mentor for his faculty peers.

“Dr. Parmelee has created a community of medical educators, which will be his ultimate legacy,” said Margaret M. Dunn, M.D., dean of the Boonshoft School of Medicine.

He has received many honors for his contributions to medical education. The American Psychiatric Association awarded him the Roeske Certificate of Recognition for Excellence in Medical Student Education in 2001 and appointed him a Distinguished Fellow in 2003. In 2012, he received the Faculty Excellence in Teaching Award from the Southwestern Ohio Council for Higher Education and was named the Kegerreis Distinguished Professor of Teaching, Wright State University’s highest recognition for educators.

In addition to Parmelee, the AAMC also recognized Elizabeth Armstrong, Ph.D., founder and director of the Harvard Macy Institute; Owen N. Witte, M.D., founding director of the Eli and Edythe Broad Center of Regenerative Medicine and Stem Cell Research at the University of California, Los Angeles; and Philip Greenland, M.D., professor at Northwestern University Feinberg School of Medicine among others. Michigan State University College of Human Medicine also was recognized for its outstanding community service.