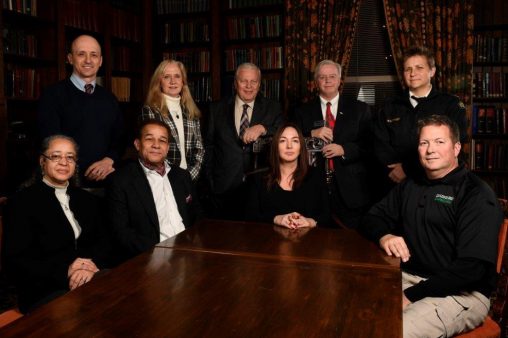 It’s the unthinkable — a terrorist attack, a powerful tornado, a massive explosion, contamination of drinking water, the crash of an airliner that kills both passengers and people on the ground. All of these things can paralyze communities, making it difficult for them to respond quickly.

“The group is full of practitioners and academics. We’re combining the thinkers and the doers,” said Wright State’s Terry L. Oroszi, who led formation of the think tank. “We want to prevent or decrease damage — property damage, environmental damage and human casualties.”

Among the members of the group is Dayton Mayor Nan Whaley.

“The Dayton Think Tank provides a great opportunity for academics and first responders to work together and share opportunities for our residents,” Whaley said.

Oroszi is an assistant professor of pharmacology and toxicology at Wright State and director of the department’s Chemical, Biological, Radiological and Nuclear (CBRN) Defense certification program. She came up with the idea for the think tank following a visit to Wright State by the assistant commandant of the Army’s Chemical, Biological, Radiological and Nuclear School at Fort Leonard Wood, Missouri.

“If an incident happens, what should we do as a community?” Oroszi said. “The leaders would have an opportunity to reach out to us because we are experts in our own fields and collectively work together. We could answer those questions before those incidents even happen in some cases. We want to be a resource.”

The think tank, which meets quarterly at the Engineers Club of Dayton, first met in July. At the second meeting, in November, members were placed into subgroups based on their expertise.

The think tank could be used to form a command center in case of emergency. It plans to conduct tabletop exercises to practice emergency response and work on creating resilience in the community to minimize the impact of a disaster. A website will include strategies for preparing and responding to emergencies, and the think tank will have a social media presence. The think tank will also sponsor an annual symposium on disaster-related issues.

“It’s unique for community officials to have direct access to people who understand and know the problem space,” said Jim Gruenberg, assistant director of Wright State’s National Center for Medical Readiness. “The officials actually get to pick the brains of the experts, who have an idea for solutions and can really give strong, objective advice.”

Gruenberg has worked as a firefighter in the New York City and Kettering fire departments. He was a key leader in the development of urban search and rescue team Ohio Task Force One and has deployed 14 times to disasters that included collapse of the World Trade Center as well as hurricanes Katrina, Ivan and Rita.

“I’ve been around the block a lot; I’ve experienced the post-disaster environment many, many times,” Gruenberg said. “Community leaders are often denied exposure to those people who really understand what it’s like, what needs to be planned for, what are some of the circumstances are that are often forgotten or missed.”

Larry James, director of the Continuing Education Program in Wright State’s School of Professional Psychology, was chairman of the psychology department at Walter Reed Army Medical Center in Bethesda, Maryland, when a Boeing 757 hijacked by terrorists slammed into the side of Pentagon on Sept. 11, 2001, collapsing a portion of the building and killing 125 occupants.

James led teams of mental health professionals into the burning Pentagon. And from Sept. 11 through December, the teams provided psychological services near the Pentagon to victims of the attack and their families.

“I can’t give you a number on how many national and international disasters I’ve been involved in, helping provide resources to a community, mostly mental health,” said James. “Having the Dayton Think Tank gives community leaders instant access to experience and resources.”

Oroszi echoed that. She says a major benefit of the think tank is that it enables experts and community leaders to share knowledge, resulting in a cross-pollination of expertise.

“I think that is perhaps the most valuable thing about this,” she said.

The think tank has four mayors, including Fairborn Mayor Dan Kirkpatrick. It also includes Dayton Police Chief Richard Biehl and Dayton Fire Chief Jeffrey Payne; representation from Wright-Patterson Air Force Base, local industry and the University of Dayton; and 17 people with Wright State connections, with representation from five colleges as well as the Wright State Research Institute and the Ohio Center of Excellence in Knowledge-Enabled Computing.

“Basically, every field has a part in this,” said Oroszi. “We need everybody.”