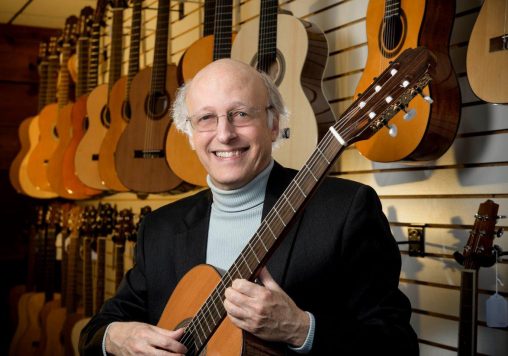 Jim McCutcheon, a two-time Wright State graduate who teaches classical guitar at the university, won the 2017 Governor’s Award for the Arts in Arts Education. (Photos by Erin Pence)

A sign in the front window of McCutcheon Music says “Just Play.”

That’s exactly what owner Jim McCutcheon has been doing since he was 8 years old and discovered his big sister’s ukulele in the family room closet.

Today, the classical guitarist, longtime Wright State University adjunct faculty member and “The Guitar Man,” as he is known by hundreds of schoolchildren, is poised to receive the 2017 Governor’s Award for the Arts in Arts Education.

“It means that somebody noticed I’ve been creating a body of work,” said McCutcheon. “I feel affirmed.”

In addition to being adjunct faculty at Wright State, McCutcheon is artist-in-residence at the University of Dayton and adjunct faculty at Miami University. He has made four recordings for adults and two for children and written several publications of guitar compositions and instruction books. He has also produced a weekly classical guitar program, “The Intimate Guitar,” on Dayton Public Radio for the past 30 years.

McCutcheon will receive the governor’s award May 17 in Columbus. The awards ceremony will be held in conjunction with Arts Day, a daylong arts advocacy event sponsored by the Ohio Citizens for the Arts Foundation.

McCutcheon is a champion of the arts, which he says are deeply embedded — sometimes invisibly — in our culture.

In 1988, McCutcheon opened McCutcheon Music in downtown Centerville to provide music lessons and sell and rent musical instruments. The business, which he operates with his wife, Debbie, has since opened a second location that has grown to 7,200 square feet and more than 50 teachers giving lessons, winning Dayton Magazine’s “Best Music Instruction” for the past two years.

“We have classes for everybody from newborns on up,” McCutcheon said. “Believe it or not, you can do an awful lot with little babies.”

On the wall of his office hangs a framed photo of McCutcheon leaning against a sequoia-sized guitar. There is also a “GTR MAN” license plate and a guitar-shaped mirror bejeweled with sparkling blue and red stones.

Just down the hall is the store’s Sistine Chapel, a heavenly display of stringed instruments.

One entire wall is devoted to guitars, banjos and mandolins, which dangle enticingly. There are racks of sheet music, stacks of amplifiers, violin bows, instrument cables and guitar straps. There is even a ukulele painted with a smiley face.

It’s been a long, strange, wonderful journey for the 65-year-old McCutcheon, who shows no signs of slowing down.

He grew up Pittsburgh, where he would listen to his sister’s Kingston Trio and Brothers Four albums and sit on the floor and practice the ukulele for hours at a time. He said he mastered the instrument with hard work rather than natural ability.

“It was a lot of practice, but I just liked it so much it didn’t seem like it,” he said.

The family moved to Dayton when McCutcheon was 11, and he finally persuaded his father and mother — an amateur pianist — to buy him a guitar. Then came a bump in his musical road.

“I had a bad seventh-grade choir audition and stayed away from music in junior high and high school,” he said.

However, he continued to play the guitar outside of Wayne High School, where he graduated in 1969 as valedictorian.

With an interest in science and electronics and a fear that a career in music would make him a pauper, McCutcheon decided to study physics at the University of Dayton. But then engineers in the area began suffering layoffs, giving him second thoughts about that career.

“I thought that if I am going to be insecure in my job,” he said, “I might as well be a musician.” 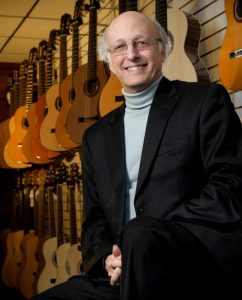 At the end of his senior year, in 1973, McCutcheon and his five-member band Quintessence signed with an agent and started touring. At about the same time, he was accepted into medical school at Rush Presbyterian St. Luke’s Medical Center in Chicago.

But the siren song of music won out.

“When I was on the road, I did music 65 hours a week and loved it,” he said. “I had more energy at the end of every week than the beginning, and I listened to that.”

When the two-year tour ended, in 1975, McCutcheon enrolled at Wright State, where a classical guitar major was created just for him. He became the first person to graduate with a bachelor’s degree in guitar performance and was the only person in Montgomery County with such a degree.

McCutcheon loves the versatility of the guitar.

“It lets you play everything from geniuses of the past like Bach to people who really know how to write about feelings — Paul Simon and James Taylor,” he said. “You can play jazz and rock ’n’ roll and punk. You can do all of it with that instrument, and you can get somewhat proficient at it in a year.”

One of McCutcheon’s non-Wright State students became lead guitarist for Megadeth, a heavy metal band from Los Angeles. “He toured with them for two years because his technique was so clean that he won the audition,” McCutcheon said. Another of his students, who studied with him as a child at Wright State, is now president of the Guitar Foundation of America.

“I take lots of different guitars into the schools to entertain the kids and teach them about all of these different instruments — the steel string guitar, the classical guitar, the 12-string guitar, the electric guitar, the banjo, the mandolin, the lute, the ukulele and the charango from South America and the balalaika from Russia,” he said. “I can demonstrate them and I can talk about them in a way that the kids remember.”

He won a Parents’ Choice Foundation Silver Award for his album “A Day with the Guitar Man.”

“The premise of the CD was that from the time I wake up until the time I go to sleep at night, it’s all music and guitar,” he said.

McCutcheon can be heard weekends on Dayton Public Radio’s “The Intimate Guitar,” which he has produced since 1986. The pre-recorded, 60-minute show, which is also heard on Wright State’s WWSU, showcases artists from around the world, mostly classical guitarists.

“It’s my chance to affirm their work,” he said. “They’re pouring their life and their energy into this challenging instrument.”

McCutcheon also reviews records for Soundboard, the journal of the Guitar Foundation of America, and serves as guitar adviser to the National Federation of Music Clubs. He is past president of the Dayton Classical Guitar Society and directed concerts at the Dayton Art Institute for eight years.

Along the way, McCutcheon played guitar at the Peasant Stock Restaurant for 21 years. That’s three nights a week for a total of 3,000 nights. He has also performed all over Ohio as well as in England and Russia.

In 1991, McCutcheon was the first recipient of the Wright State School of Music‘s Distinguished Alumni Award for his achievements as a musician, music teacher and arts advocate. He also received the Graduate School‘s 1992 Outstanding Alumni Award.

McCutcheon has given back to Wright State by helping create the Jim McCutcheon Guitar Scholarship and by coordinating the Tárrega Fund. Named after a Spanish composer and classical guitarist, the fund sends each Wright State guitar major to a national conference at least once and brings artists for concerts and master classes to campus.