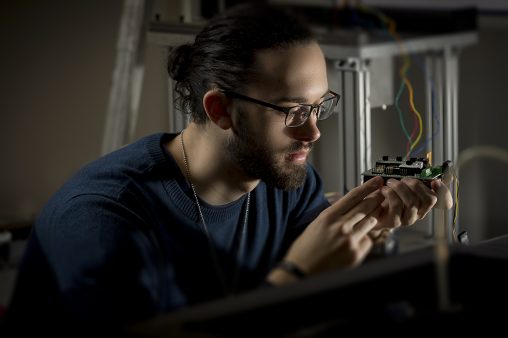 Wright State senior Tony Carpenetti was drawn to mechanical engineering because it includes the design and manufacturing of machines. (Photos by Will Jones)

It was clear what he was meant to do. Tony Carpenetti, a senior majoring in mechanical engineering at Wright State, found his passion in his high school physics class.

For a topic that is often a challenge for students, Carpenetti excelled and found himself intrigued in the physical aspect of science and mathematics when he helped create a trebuchet and model rocket.

He also attended a summer engineering camp hosted by the University of Dayton that exposed him to chemical, civil, electrical and mechanical engineering.

He chose to study mechanical engineering at Wright State since it includes the design and manufacturing of machines, including working with gears, fluids and items in motion. It was the most direct way to interact with science and mathematics for Carpenetti.

“I like being able to design things and see my work from inception to completion,” he said. “I’m a visual learner and I like to see what’s going on.”

His father works at a community mental health services agency, serves on the Cambridge school board and is a worship leader at the First Baptist Church of Cambridge. His mother is a secretary for the Cambridge City School District. He is the middle of three siblings.

He looks up to his parents because of “how they raised me and how they kept us united and have shown love to us and supported us in whatever we were doing,” he said.

Engineering is in Carpenetti’s blood. His mother pursued engineering before ultimately choosing secretarial studies. He has several uncles who work in the engineering field and his grandfather was mechanical engineer.

When he’s not constructing a project, Carpenetti crosses over to the right side of the brain by playing many instruments, including piano, drums, guitar, violin and ukulele. He was in band from fifth grade through his senior year of high school, playing the trumpet and bass guitar, and was the field commander of the marching band.

Carpenetti’s interests range just as wide as the measurements of using the Range of Motion tool used in mechanical engineering.

“My interests are broad. I like to do graphic design as well as having the engineering and science side, as well as athletic, music and having my faith. I seem to do a little of everything,” he said. 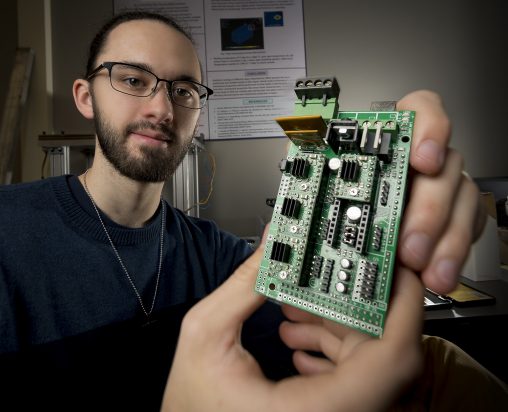 As part of an internship with BWI Group, an automotive chassis supplier in Dayton, Tony Carpenetti traveled to Chihuahua, Mexico.

Carpenetti also competed on his high school swim team as a freestyle sprinter and played on his soccer in middle school and high school. He currently enjoys playing intramural and recreational sports.

His many interests have not interfered with him receiving internships and doing well at Wright State with over a 3.5 GPA. He is involved in Wright State’s Cru and Honors Program.

Wright State has “helped me get the internships that I have gotten from the experience and coursework,” said Carpenetti. “I’ve had an engineering internship every summer and thankfully they’ve been paid.”

Carpenetti has even traveled to Chihuahua, Mexico, while interning with BWI Group, an automotive chassis supplier in Dayton.

During his internship, he programmed a car’s suspension system to increase efficiency of the vehicle’s damper, which connects the car’s axle to the body, allowing for a smoother drive over bumps and holes in the road.

He is currently continuing the design of a 3-D metal printer created by a previous group of students for his senior design project.

Graduation is near for Carpenetti, and he can look back on his years at Wright State as a positive blueprint for his future. “I’ve made some of the best friends I’ve ever had from here,” he said.