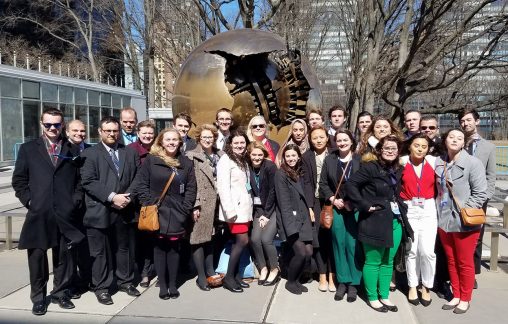 Representing Italy this year, the Wright State team was named an Outstanding Delegation — the highest honor — at the National Model UN Conference on March 19-23.

The year’s team benefited from a significant influx of new members, thanks to stepped-up recruiting efforts by returning students, said Amanda Baker, one of the team’s head delegates. Each returning team member not only mentored two to four new students, they also read more background guides and edited more papers than previous years.

“That’s what the team’s success really comes down to, I think,” said Baker, who is in the Master’s Program in International and Comparative Politics. “It was the willingness of the returning delegates to adapt to new rules and guidelines and spend more time teaching more people.”

“We couldn’t have done it without the cooperation of the team and our professors who were willing to work with our hectic schedules,” Baker added.