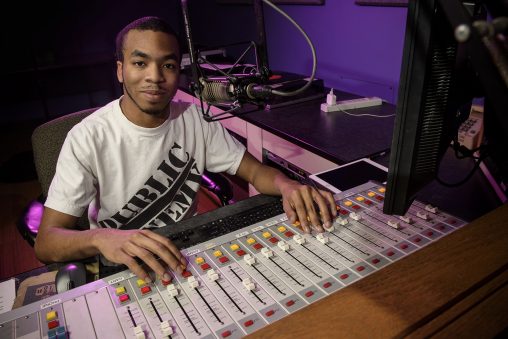 Music has taken many forms in the life of Stacy Worley II, a liberal studies major at Wright State. So much so, he creates his own music and has embraced the culture of deejaying.

His path to become a radio DJ sparked his imagination as he was listening to a satellite radio show.

“I was sitting in my basement listening to the radio and heard these two guys having fun,” Worley said. “I wanted to learn how to become a real DJ.”

Born and raised in Dayton, Worley attended Stivers School for the Arts where he played the cello in his school orchestra. Growing up he also played tuba, baritone, the trumpet and French horn, organ and piano and competed in track, cross country and soccer.

During his freshman orientation at Wright State, he met a former student who connected Worley to WWSU. Worley brought back hip-hop to the station, after WWSU went a year without it.

Worley has worked as a DJ since his sophomore year and is also the programming director at WWSU. Working at a radio station has a unique workplace vibe.

“The atmosphere is different than most nine-to-five jobs because you’re in a field where most people have the same common interests as you,” he said. “I like a job where I can listen to music all the time and talk to different artists.”

His genres range from hip-hop to retro beats to indie rock songs that have been influenced by hip-hop. He personally listens to West Coast hip-hop, a Dayton-influenced genre that incorporates funk.

In 2015, Worley was nominated for Best New DJ by the Ohio Hip-Hop Awards. “A representative contacted me and said ‘congratulations,’ and I said, ‘on what,” he said, when he learned of his award. “It was a little adrenaline rush.”

Worley has interviewed more than 50 artists and DJs. As a DJ, he has provided entertainment for 10 events in the 2016 to 2017 school year on campus. Outside of Wright State, he has emceed for dinners and award shows.

A good DJ understands “the culture of being a DJ, plays good music and knows how to read the crowd,” said Worley. “Part of the culture of a DJ is knowing the terms. There are different terms like ‘scratching,’ ‘mixing,’ ‘queuing your music’ and ‘beat matching.’”

His passion for producing music began in high school when his friend gave him recorded albums and they would play jam sessions during private rehearsal times. In college, he has experimented with producing music of his own.

“I would get together with my friends and we’d have little instrument jams,” he said.

For Worley music is a kind of therapy. “Each album takes you to a different place. Some places are more colorful than others,” he said. “I like hearing other people’s concept of music because I’ll either have the same idea as they have or they’ll have an idea that’s completely left field and it interests me.”

Worley aspires to open a production company and work in the entertainment industry to mentor artists, design their marketing and branding and build their audience.

His father, Stacy Worley, is a banker and minister and his mother, Nellie Worley, is a contractor at Wright-Patterson Air Force Base and is also pursuing a degree in nursing. His older sister graduated from Wright State with a degree in industrial engineering. His younger sister is studying forensic science at Sinclair College.

When Worley is not studying, deejaying and producing music, he is a concert photographer. He has photographed hip-hop artists and electronic dance music DJs such as Chance the Rapper, J.Cole and Dillon Frances.

He plans to one day compete in the Red Bull Thr3estyle competition.

Worley’s show, “Yo! Wright State,” airs Thursdays from noon to 3 p.m. You can listen to his show at wwsu1069.org/start and hear his music projects at app.emaze.com/@ATZFQWQO/djcuest.