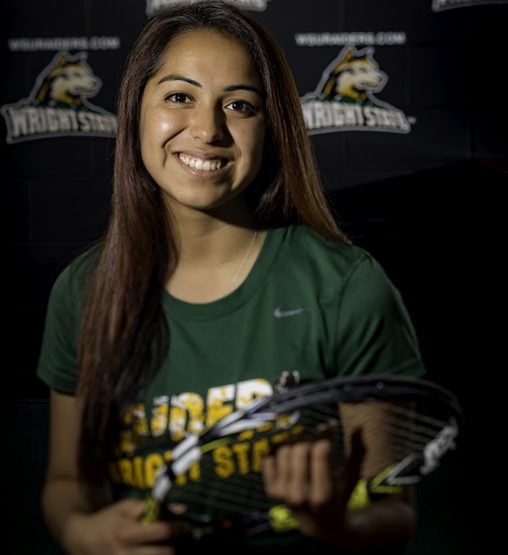 Vanessa Madrigal enrolled at Wright State to play on the tennis team and study biomedical engineering in the College of Engineering and Computer Science. (Photos by Will Jones)

She carries a 3.8 GPA in biomedical engineering while also playing on the Wright State University tennis team.

Vanessa Madrigal’s success on the court and in the classroom exemplifies the Department of Intercollegiate Athletics’ emphasis on academics and its longtime commitment to helping student-athletes be successful and productive after Wright State.

“We bring people in here with the idea of making them better people,” said Athletics Director Bob Grant. “We’ve got a very defined mission statement that we simply call PSA. It means we take our student-athletes as people first, as students second, as athletes third. Our thinking is that a well-balanced, happy student-athlete is more productive not only here as an athlete but more importantly academically and in the community.”

And 88 percent of student-athletes graduate, highest in the school’s history.

“All the while, they are juggling full-time athletics with a full-time academic load,” said Grant. “So it’s really impressive.”

Student-athletes have the benefit of three academic-support advisers. And the Setzer Pavilion/Mills Morgan Center gives the basketball teams a landing spot for academic support as well as study lounges and access to the internet. It also enables the teams to practice with flexibility around class time.

But Grant believes the biggest factor in the academic success of student-athletes is the culture that has been instilled.

“I think they know coming in it’s a priority for us; it’s non-negotiable,” he said. “And I think the culture has taken hold. When you walk into a place and all of your teammates are taking something seriously, you tend to fall in line. So it’s become almost a tradition.”

Madrigal grew up in Highland, Indiana, just southeast of Chicago. Her father is an operating engineer and her mother a tennis instructor at a tennis club. Madrigal first picked up a racket when she was 6 and two years later was playing competitive tennis.

“I’m a very competitive person,” she said. “I could have been put into any sport and just loved the competition.”

One thing tennis teaches is how to deal with and grow from losing, she said.

“It’s a very mental game,” she said. “Even though I would get frustrated, I just fell in love with it.”

After graduating from Highland High School in 2013, Madrigal chose to enroll at Wright State to play on the tennis team and study biomedical engineering in the College of Engineering and Computer Science.

“I knew I wanted to do some type of engineering because I love the math and science growing up,” said Madrigal, a senior.

Her twin sister, Abigail, is studying business at Wright State and also plays on the team.

Madrigal said one secret to her success in both tennis and her studies is limiting her social life and being laser focused on tennis and academics.

“I am self-driven,” she said. “I love playing a sport I’m extremely passionate about, and I love being in an academic field I’m passionate about. I have fun when I’m studying. I mean it’s difficult and there is a lot of crying, but I would rather do that than anything else. I get excited when I try to figure out a problem.”

Madrigal said the athletics department puts a heavy emphasis on academics. She said the advisers are instrumental in helping student-athletes plan their class schedules, in helping minimize the missing of classes for athletic contests and of making sure the students hand in assignments or make up their work.