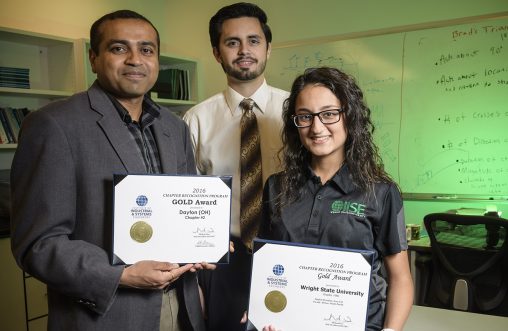 They have their hand in virtually every kind of business, from designing products to getting them to the market, through creative application of mathematics, science, business and human factors skills. They analyze and optimize complex systems keeping in mind the role humans play in such systems. They are industrial and systems engineers, and like many engineering disciplines are represented by a professional society, the Institute of Industrial and Systems Engineers (IISE).

Professional societies not only provide continuing education for their members by keeping them up with developments in the field, but also provide an avenue for job and networking opportunities. Societies are cheerleaders for the profession, boosting the morale of members and showing their value to society.

Under Parikh’s leadership, the IISE chapter rose from the lowest level of recognition to the highest – from Red to Gold – in just one year. It is the highest recognition a chapter can receive based on the demonstrated excellence in activities during a given year.

On behalf of the chapter, he will be honored at the Honors and Awards Banquet at the IISE Annual Meeting in Pittsburgh in May.

“There is a level of appreciation and credibility once you are part of a vibrant society,” said Parikh, associate professor in the Department of Biomedical, Industrial and Human Factors Engineering in the College of Engineering and Computer Science, as well as director of the Data Analytics and Optimization Laboratory.

Parikh also serves as the faculty adviser to the Wright State IISE student chapter, which has been a Gold chapter since 2013. The revival of that student chapter started back in 2012 when Parikh became the faculty adviser and proposed several initiatives working closely with the student presidents (Elizabeth Crawford, Nick Ballester, Stephanie Martens and Jessy Eid).

Parikh, originally from India, earned his Ph.D. in industrial and systems engineering from Virginia Tech in 2006. He spent two-and-a-half years as a research scientist for a supply chain software company in Atlanta before joining the faculty at Wright State in 2009.

In late 2015, Parikh was asked to lead and rejuvenate the professional IISE chapter of over 100 active members. When Parikh was elected president for the term starting January 2016, there were only a handful of active senior members who were keen to volunteer their time with Parikh to initiate the revival.

Parikh, in collaboration with the board members, rolled up his sleeves and organized a flurry of activities.

The first step in the turnaround was a survey of the chapter’s member – the 35 responses urged better communication from the leadership. This prompted them to begin quarterly newsletters that included profiles and achievements of individual members. Parikh and the board organized webinars with professional speakers, set up tours of local industries, turned to the Wright State IISE student chapter for fresh ideas, developed a chapter website and rotated meetings between Dayton and Cincinnati, which increased the number and variety of attendees.

At the same time, Parikh and his board submitted a strategic plan to IISE headquarters detailing the chapter’s community engagement, recruiting efforts and what it was doing to help the members.

“The exciting part is that within 12 months we were able to turn it around,” he said.

Of the 49 IISE Professional Chapters worldwide, only eight received Gold recognition in 2016.

There are strong job opportunities for industrial and systems engineers, with demand in manufacturing, defense, health care, supply chain and entertainment. Disney, for example, employs nearly 100 industrial engineers at its Orlando headquarters to minimize waiting in lines and improve the customer experience.

“And this is a profession that takes you on the professional management ladder,” said Parikh. “It speeds up the process.”

Parikh said the close ties between the professional and Wright State student chapters also give students significant opportunities to interact with engineers in the region. It helps them preview their future as an engineer and gives them an opportunity to contribute to the society at an early stage, develop leadership skills and strengthen their resume for future jobs.

“We are producing well-rounded engineers who understand professionalism and leadership, not just technical content,” Parikh said.