Engineering for a cause 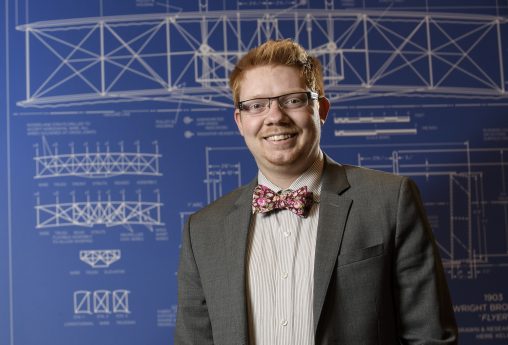 Sam Salchak ’17 uses his engineering degree from Wright State to design a life-sustaining washing machine for a hospital in Malawi, Africa.

Imagine creating a solution that affects millions of people in poverty overseas. That is what Sam Salchak, who graduated this spring from Wright State with a degree in mechanical engineering, did as part of his senior design project.

Salchak and his team were tasked with designing a washing machine out of limited resources that can be redesigned at a Wright State-partnered hospital in the African nation of Malawi, one of the poorest countries in the world.

“The washing machine is a human powered design,” said Salchak. “They don’t have access to good electricity and it will allow for cleanliness in the hospital to protect from AIDS virus transmission and help both the workers and the patients.”

The machine is made from materials that are also accessible to the Malawians. Salchak and his teammates refrained from using electrical tools and worked with their hands to create the machine.

“It’s a system that can be built using only tools and resources available to them,” he said. “That’s the really intricate part of the design because we’re using 55-gallon drums, wood, steel tubing, normal-sized fasteners and bike parts.”

The washing machine will stay at Wright State, but Salchak and his classmates will send instructions to the hospital staff in Malawi explaining how they can recreate it.

“Our goal is to not ship anything, but we could show them and give them instructions in how to build it as it allows them to build as many as they need,” Salchak said.

The project turned into a bigger challenge than Salchak and his team originally realized.

They found that the Malawian government owns all standing trees, creating the challenge that citizens would have to seek permission to cut down trees by hand themselves instead of buying wood, said Salchak. So the students designed the machine with basic metalwork and welding.

Salchak has been active in engineering projects since a young age. His father, Paul Salchak, worked as an electrical engineer and in aerospace, so Salchak often helped his father with projects.

“We built decks and I helped him around the house with projects,” he said. “I always like building with my hands so engineering was a convenient transition and I’ve always been into science and math.”

While attending Bellbrook High School, Salchak took seven AP courses and five engineering courses. He was also involved in theater for four years and started a rocketry team. He also assisted in starting the first bowling team and once scored 289 points out of a possible 300 in a competitive league.

“I always have to be moving,” he said. “I once had a high school teacher give me a Rubik’s Cube to focus in class.”

Outside of school, he likes to play the piano, bass, acoustic and electric guitar and is vocally trained from his experience in theater. He also likes to golf, hike and volunteer in Christian ministries. He collects golf balls from different locations he has visited throughout the United States.

He is rarely seen without a tie, having a collection of 80 neckties and 14 bowties.

Salchak is a transfer student, having completed his first two years of school from Grove City College, a private Christian school in Pennsylvania with a highly competitive engineering program.

He transferred to Wright State to be closer to home and be able to gain job and internship experience in engineering.

“Wright State has helped with the sense that they have given me a good opportunity to transition from a student standpoint to a professional,” he said. “They’re really supportive with class availability and allowing time for me to work.”

Salchak works at BWI Group, an automotive suspension supplier that designs and manufactures transportation technology, where he builds passive and active car suspensions. He has traveled to Mexico and Poland for his company.

He plans to continue working at BWI Group and hopes to continue designing technology for developing countries.

“My brain is always working on engineering projects. I like a good, passionate outlet,” said Salchak. “I have a long-term pipe dream of creating a self-sustaining town in a Third-World country consisting of power generation, water and possibly help them get a good plant-sustaining economy. I’ve always had a heart for Bangladesh.”