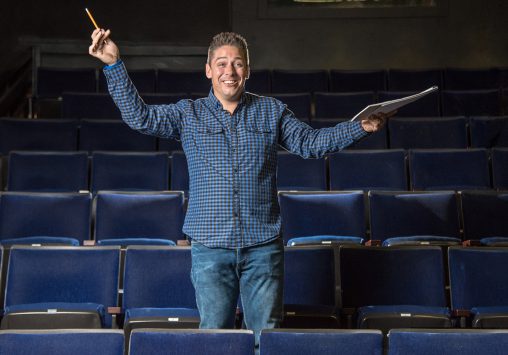 Ryan Scarlata, who attended Wright State in pursuit of a bachelor’s degree in acting, designed performances for people with sensory sensitivities at the Columbus Children’s Theatre. (Photo by Meghan Ralston)

Former Wright State student Ryan Scarlata designs performances for people with sensory sensitivities at the Columbus Children’s Theatre, where he is the associate artistic director.

Aspects of a performance could be triggers in audience members. At the theatre, ushers stand beside the audience to raise glow sticks in the air as a forewarning so audience members may prepare themselves for a dramatic or surprising scene.

“The ushers are there to help provide a safe, supportive and judgment-free environment,” said Scarlata, who attended Wright State in pursuit of a bachelor’s degree in acting.

Allowing children to feel supported is one of the main reasons the theater has produced these shows for many years. The idea was suggested by an audience member who assisted the theater in developing sensitive performances.

“At the end of the day, the judgment-free environment is the crux of the program, so families can experience the art form together and not worry if someone is looking at them or is being distracted from them,” Scarlata said. “They know that they’re in an audience where they understand what it’s like to be in their shoes.”

Many parents of autistic children feel they cannot take their child to a non-sensory friendly performance. However, Scarlata is seeing a gradual change.

“It’s been a stepping-stone for many of them,” he said. “Some families come for years and transition to a typical performance.”

The actors and actresses are trained to perform a little differently for sensory-friendly performances.

“After a show has opened, we watch it several times and hold sensory-friendly rehearsals,” said Scarlata. “In that rehearsal, a lot of that time is educating the actors about autism spectrum disorder.”

Rehearsals are spent clarifying misconceptions and rehearsing small changes made to a play. For example, the actors train their bodies to move in such a way that preps the audience to know that a prop will be thrown.

“If a character is going to yell and scream, we train the actor to gradually scream, raise their voice and use their bodies to indicate the heightened emotion before they get to the yelling,” he said. “This helps make the performance intuitive for the audience so they are not caught off guard.”

Tweaks may be made for a sensitive production, but the storyline and the characters are the same.

“It’s art accessibility, the actors can still do what they do,” Scarlata said. “To modify the story or sacrifice the artistic integrity would actually be a grave disservice to the audience.”

For every performance Scarlata’s favorite moment is “looking at the audience and knowing that someone in the audience is experiencing their first theater performance. I think that’s so exciting and thrilling to be a part of.”