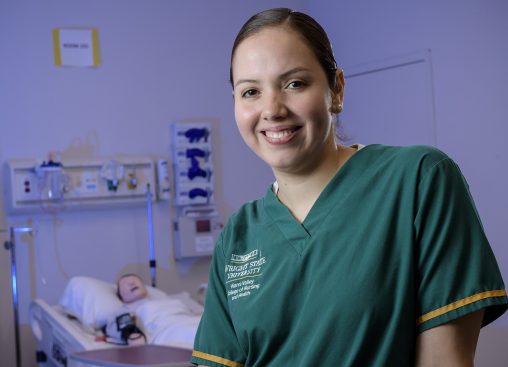 After serving as a medic at Wright-Patterson Air Force Base, Lilia Barberi is preparing for a career in nursing through the Wright State Veteran Bachelor of Science Nursing program option. (Photo by Erin Pence)

Lilia Barberi’s Air Force career may not have gotten off to a perfect start, but it definitely changed her life.

During basic training at Lackland Air Force Base in San Antonio, Barberi broke her ankle, extending the usual eight-week training period to six months to give her time to recover in the hospital.

Once she was healed, she was given a job as a medic. It turned out to be a fortuitous assignment. Barberi was assigned to Wright-Patterson Air Force Base, where she met her husband, who was also an Air Force medic, and found her dream career in nursing.

Today, Barberi is a senior in Wright State University’s Veteran Bachelor of Science Nursing program option, a pre-licensure B.S.N. program option for veteran and active duty personnel from the Air Force, Army and Navy who have completed training as medics and corpsmen.

Offered by the College of Nursing and Health, the program admitted eight veteran students last fall and hopes to grow to up to 24 this fall.

The program is a great fit for Barberi. “You can make an immediate connection as a veteran and as a health care provider because you share the same experiences,” she said.

Barberi grew up in San Diego, the daughter of Mexican immigrants. After she graduated high school, she worked in retail and for an insurance broker. Wanting a change in her life, Barberi decided to enlist in the Air Force.

“I was looking for something that would fulfill me better, have a meaningful purpose for me,” she said.

It worked and set her off on a path to become a registered nurse.

She trained as a medic at Sheppard Air Force Base in Wichita Falls, Texas, and then was stationed at Wright-Patterson Air Force Base, where she worked in the medical and patient unit and the pediatric clinic.

She especially enjoyed working with children and adolescents in the clinic. “It was really inspiring to see the children being so resilient and be able to go through everything they were going through,” she said.

Working with patients came naturally to Barberi. “I love helping people,” she said. “It is fulfilling to me to be able to help others and comfort them when they’re at their worst.”

Serving in the Air Force helped her become a stronger person both physically and mentally. She also created lifelong friendships and discovered her love for nursing.

Barberi left the Air Force after her son, Noah, was born in 2013. A year later, she enrolled at Wright State to study nursing.

Barberi is attending Wright State with support from the GI Bill, which is paying most of her tuition. And thanks to the Veteran Bachelor of Science Nursing program option, she can earn college credit based on her health care training in the military. Barberi estimates that the college credits she can earn from her Air Force service could help her graduate one to two semesters early.

“If it wasn’t for the military I wouldn’t be able to afford school,” she said.

Through the veteran nursing program Barberi has connected with other veterans and health care workers, which has helped her feel comfortable at Wright State.

“I think for a lot of people who have been in the service it’s easier for them to be surrounded by other veterans,” she said. “I also think you’re with likeminded people and they realize if you worked in the health industry they don’t underestimate you and allow you to learn and work on your weaknesses and make your strengths better.”

After she graduates, Barberi wants to work in a hospital, perhaps in pediatrics or mental health.

Although the nursing program takes a lot of dedication and hard work, Barberi is happy with her decision to enroll at Wright State. When she thinks of her son, she knows it’s worth it.

“He’s one of the reasons why I went back to school,” Barberi said. “I wanted to better myself and I want to be a role model to him.”