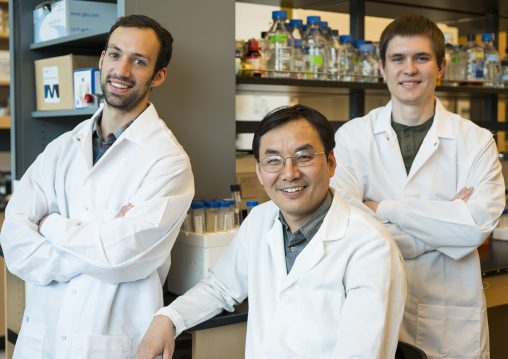 From left: Wright State researchers Elliott Hayden, Shulin Ju and Alan Cone published a commentary on research on Lou Gehrig’s disease in the Proceedings of the National Academy of Sciences. (Photo by Will Jones)

A prestigious scientific journal that featured a paper on research into the causes of Lou Gehrig’s disease asked a team of Wright State University researchers conducting similar research to evaluate the findings and submit expert commentary to be published along with the paper.

The Proceedings of the National Academy of Sciences, one of the world’s most-cited and comprehensive multidisciplinary scientific journals, published a commentary, “Supersaturated proteins in ALS,” from Shulin Ju, assistant professor of biological sciences; Elliott Hayden, an M.D./Ph.D. student from Cleveland; and Alan Cone, a biomedical sciences Ph.D. student from Dayton.

“That Shulin involved his students is wonderful mentoring,” said Christopher Wyatt, associate dean of the Wright State College of Science and Mathematics.

Amyotrophic lateral sclerosis (ALS), better known as Lou Gehrig’s disease in the United States, is a relentlessly progressive fatal neurodegenerative disease. Patients with ALS suffer from degeneration of motor neurons in the brain and spinal cord, leading to progressive muscular weakness and culminating in death due to respiratory paralysis. About 30,000 Americans are affected. No effective treatment is available.

The goal of the Wright State research is to understand the mechanism of cytotoxicity of ALS-associated proteins using a simple cellular model yeast and to identify effective therapeutics. The specific proteins were also the focus of the journal-published paper, written by researchers at the University of Cambridge, Northwestern University and the University of Wollongong in Australia.

“A lot of people are going to read this article,” said Ju.

Ju earned his bachelor’s and master’s degrees in his native China. He received his Ph.D. in molecular biology at Wayne State University in Detroit and did post-doc training at Brandeis University in Waltham, Massachusetts. He joined the faculty at Wright State in 2013.

Ju began his ALS research when he was at Brandeis. He used simple yeast to study disease pathways because the yeast cells are similar to those of humans. ALS can be genetic, but in most cases it is not. And in those cases, there is no apparent reason or cause. However, the two kinds of ALS have the same affected cells and disease progression.

“The hope is to find a cure, or to slow down its progression at least,” said Ju. “A lot of research is going on in many labs. We need to find a solution.”

Hayden said the research in the article was able to show how the different proteins linked to ALS are connected.

“How do all of these different things cause the same disease? No one really knows,” said Hayden. “But this article tried to explain that and proposed an hypothesis on how all of these proteins are related to each other.”

Hayden, who has been working in the lab for three years, said he is flattered that Ju asked him to comment on the article.

“It means that he has trust in me, faith in me,” said Hayden. “He always treats me like a colleague. This is just a prime example of that. And I got to read a paper that I might normally not read and go in-depth on it.”

After graduating from Wright State with his M.D. and Ph.D., Hayden hopes to complete a medical residency specializing in neurology.

“In one of our classes in medical school, we got to meet an ALS patient and interact with them and hear their story,” he said. “That really had a huge impact on me.”

Cone wants to go into industry or work at Wright-Patterson Air Force Base, trying to develop therapeutic products for neurodegenerative diseases.

Cone studies the same protein as Hayden, but instead of budding yeast uses fission yeast, which divides the same way as human cells do.

“If Elliot finds something in budding yeast, I can test it in fission yeast and see if it holds up and vice versa,” he said.

In addition to contributing to the commentary, Cone created an illustration for the journal to illustrate the paper so that readers could quickly understand its findings.

“This was a great honor,” he said. “It’s a very well-respected journal and I certainly didn’t think my name would be in it, at least for a long time.”