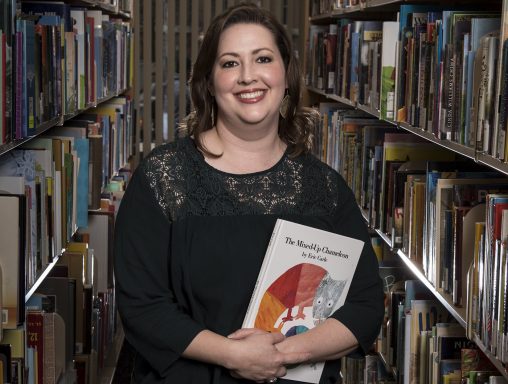 Allison Rives, who is pursuing her master’s degree in literacy from the College of Education and Human Services, instills a love of reading in her elementary school students. (Photo by Will Jones)

The characters can be as diverse as the students at Wright State. The plots may bring a rush of adrenaline. The genres range from fantasy to biographies.

This is the world of reading for Allison Rives, a literacy graduate student at Wright State University who also taught reading to third-graders in the Dayton Public School system.

While growing up, Rives often escaped to a world of make-believe through her love for books.

And as an Army wife, Rives has traveled from Georgia to Texas, South Carolina and Ohio, sharing her passion for reading with the elementary-aged students. She has taught for nine years.

Rives grew up in Georgia near an Army post. “I was told to stay away from Fort Benning boys then I married one,” she said.

She is pursuing her Master’s of Education in Literacy from Wright State’s College of Education and Human Services. She and her husband received orders to return to Texas this June.

Since Ohio’s education system requires an Ohio teaching license, Rives had to take new courses to earn a certificate in order to teach in Ohio.

“As I prepared to move to the Midwest, I looked at the universities that would be nearby and found Wright State University,” said Rives. “I searched the university’s website, hoping to find information about the courses the Ohio Department of Education required of me and I landed on the Reading Program’s section. I took a risk and emailed the first name that I saw, which was Dr. Hannah Chai. As soon as I received a response, I felt welcomed. I never considered another university.”

“As a military spouse, I’m hesitant to enroll in programs because I am uncertain if I will be able to fulfill them, but with the Reading and Literacy Program, I am able to complete the degree even if I move due to the online synchronous learning,” she said.

That was two years ago.

Rives has since received guidance on best practice and development professional research, which led her to create a presentation for the Ohio Council of Teachers of Language Arts.

Rives hopes her students will learn to love reading like she does.

“If you can read and express your thoughts, you can achieve any of your goals,” she said. “There are so many struggling learners. I’m a nurturer by nature, and I want to be able to inspire them that there are adults here who care about them and want to foster their potential.”

Since she frequently moved around the country, Rives has encountered different community challenges that require her to learn how to teach differently.

“I want to be able to break a concept down into 20 different ways so that I can reach as many kids as possible,” she said.

While in Texas her students were raised in military families and would have behavioral issues when a parent deployed or traveled for a temporary duty assignment.

“When I was in Texas most of my students were military dependents,” said Rives. “There were several situations when a parent would deploy and not tell us and their child starts acting up or having difficulty.”

Her students in Dayton often struggled because of poverty or issues at home. “It’s really hard for them to focus on reading and writing when they’re hungry or stressed,” she said. “We offer 100 percent free breakfast and lunch, but sometimes that’s not enough.”

Third-graders in Ohio must pass their final exam in order to move on to fourth grade. Rives works with students to help raise their reading skills; however, she notices that students are often overwhelmed with the many exams required by the state.

As Rives grew up she often ran to books when she was stressed.

“I felt that reading a book was always an escape when I went through troubled times,” Rives said. “I felt that I could read a book and go wherever I wanted to go. And once I was able to discover new places, I learned vocabulary. When I needed to express myself I could write my thoughts before it consumed me.

As a teacher, she wants her students to have similar feelings about reading.

“I don’t want reading to be a punishment or considered a bore,” she said. “I want them to realize that there’s a true freedom in learning how to do it.”