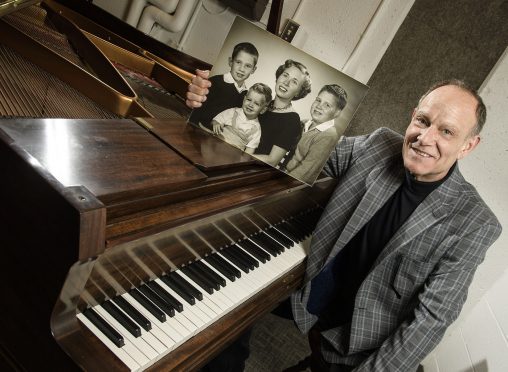 Steve King ’85 in the music practice room in the Creative Arts Center named after his mother, Marilee King, who graduated from Wright State in 1969 with a degree in education. (Photos by Erin Pence)

For eight years of their lives — between the ages of 7 and 15 — Steve and Mike King practiced the piano virtually every day on a baby grand in the living room of their Trotwood home.

Their mother — Marilee King — insisted on it.

“There was no way out of it and there was no quitting,” recalled Steve King, now 59. “She was the law, and you were going to do as was expected of you. Her standard phrase in response was, ‘You’ll thank me some day.’ And by God was she right.”

In honor of Marilee King, who graduated from Wright State University in 1969 with a degree in education, College of Liberal Arts Dean Linda Caron made a donation to have a music practice room in the university’s Creative Arts Center named after her.

“I admired her greatly,” said Caron, a close friend of Marilee’s and Steve King’s partner for the past 23 years. “She was a strong, smart and independent woman with a great sense of humor and an enormous love of family.”

Steve King, who graduated from Wright State in 1985 with a degree in political science, would use the music practice rooms a few times a week when he was a student because he didn’t have a keyboard where he lived. He hopes Caron’s donation inspires others to give back to the university.

“It is a permanent way of honoring our mother other than her gravesite,” he said as he sat in the practice room next to a baby grand piano. “We believe she deserves to be immortalized. It would be nice if all of the practice rooms could be named for someone.”

Born in Cincinnati, Marilee King moved frequently from apartment to apartment because her mother worked as a private-duty nurse for well-to-do families such as the Tafts and the Crosleys and would have to constantly relocate. But Marilee eventually moved to Dayton when her mother took a job at Good Samaritan Hospital.

After graduating from Fairview High School, Marilee worked as a secretary for Grace United Methodist Church and a car dealership, which became a call center for the military during World War II.

King’s father, Peter Sr., served in the U.S. Army during World War II, fighting in the hedgerows of France following the D-Day invasion. After the war ended, he returned to Ohio, met Marilee and the couple got married and began raising a family. They moved to Trotwood in 1957 and divorced when Steve was a teenager.

In 1964, Marilee enrolled at what would become Wright State to study education, the first in her family to go to college. She earned her degree in 1969 and began teaching in the Trotwood School District at Olive Hill Elementary School, where she would work for 23 years before retiring at 65. 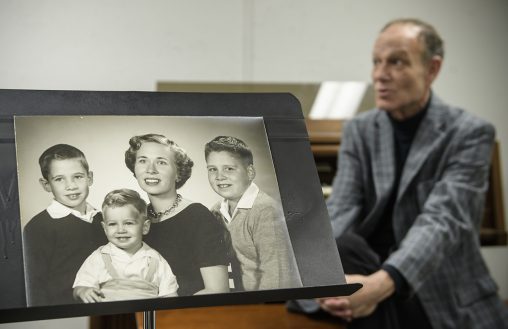 Photo of Marilee King and her sons, Mike, Steve and Pete Jr.

Music was important to King’s mother because she had always wanted to learn to play the piano, but never got the opportunity.

“She loved nothing more than listening to us play the piano,” King said. “She took such great pride and really got to live a childhood dream through what we were doing.”

The King boys included Steve, who is the youngest; Mike, the middle child, who died two years ago after a battle with cancer; and Pete Jr., who escaped piano practice because the piano arrived too late for him to start lessons in early childhood. However, Pete did have to practice the trumpet daily for six years of his life and which he played until age 60, when he blew out his lip permanently during a military funeral.

While Steve King now appreciates his mother’s strong stance on piano practice, it wasn’t so easy at the time.

“We lived in hope,” King said. “We thought some day she’ll soften up. Some day the edge will come off and she’ll say, ‘Oh, take a day off.’ But it never happened.”

Marilee was equally adamant about her boys practicing when it came to sports and theater. And they were always expected to make the Honor Roll at school.

“Another one of my mother’s edicts was that you don’t earn anything without hard work,” King said. “Knowledge was sacred, just the pursuit of knowledge. And bettering yourself was not an option. You had been given X amount of talents and a good brain at birth, and you were going to develop them to the best of your potential.”

At age 70, Marilee began to lose her eyesight and decided she could no longer safely drive, telling her son that he was going to be her driver. So began the years of what King calls “driving Miss Daisy.”

“The first time, she gets into the back seat of my car,” recalled King. “She said I want to be chauffeured today. She said I spent half my life driving your butts around, so it’s about time one of you did it for me.”

King said it epitomized his mother’s ability to switch gears, accept her fate and give up any illusions she may have had before.

“That was constant with her throughout her life,” he said. “She could adapt more quickly than anybody I’ve ever seen and with less emotion. She just ruled herself with an iron fist.”

Five years ago, she died in her sleep at home, where she lived alone. She was 85.

“She still took care of herself until the day she died. She cleaned her own house, did her own bills, her own correspondence,” said King, who would come over nearly every day to visit, run errands, cut the grass and help with other chores.

King still plays the piano. He has performed solo and with rock bands, at parties and just for fun. Today, he does keyboards and vocals in a solo act, often playing at Dayton Riverscape’s “Music at Lunch” series.

“I tried to quit once,” King said. “I lasted three years. And then I ran screaming back to the keyboards because I couldn’t take letting that skill go. It was literally a sin and a betrayal of what our mother gave us.”