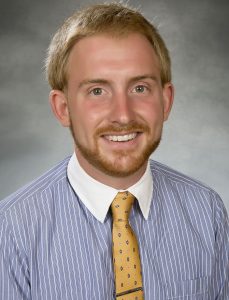 Christopher Champlin, a 2017 graduate of the Wright State Boonshoft School of Medicine.

The 2017 graduate of the Wright State University Boonshoft School of Medicine credits the scholarship with helping him to gain a better appreciation for the struggles refugees face.

“The scholarship helped me reach my goals by giving me the opportunity to go pursue them,” said Champlin, who will soon begin a combined residency in family medicine and psychiatry at the University of Cincinnati. “Obtaining the scholarship meant an incredible opportunity for me. It symbolized the dedication that Wright State has for global health and helping its students.”

Champlin traveled to Greece in May and worked with Emergency Response Centre International, a nongovernmental organization (NGO) that provides assistance to refugees from Turkey. The organization began as a search-and-rescue operation in the open seas, but shifted its mission after the flow of refugee boats slowed.

As the group began to work more closely with Kara Tepe, a refugee camp near Lesvos, Greece, Champlin helped with odd jobs. But the majority of his time was spent interacting with the people and families who lived there.

“I had hoped to gain, and believe I did, a better appreciation for the struggles that refugees face. I wanted to know how difficult it was just to get to safety, and what they had to sacrifice along the way,” Champlin said. “I wanted to get to know them as people, who they were before tragedy displaced them from their lives.”

Champlin volunteered in a health clinic run by Doc Mobile, a German NGO that sets up clinics wherever they provide the most benefit. For some time, the clinic was located near an abandoned warehouse where refugees congregated for safety and shelter. It later moved to a community center built by the Swiss Cross. Refugees had begun gathering there at a soup kitchen run by No Borders, also a German NGO.

Before the trip, Champlin didn’t truly understand the extent of the refugee crisis. Seeing the faces of those affected by violence and hardship helped him to develop connections with them. He remembers a young mother who had left Turkey while still pregnant and realized that the horrors of her homeland must have been great for her to make the decision to leave.

“They lost friends, family and most everything they had known. Most came to Europe hoping for reprieve,” Champlin said. “They don’t want to leave their homes forever, but they cannot return until it is safe.”

There was so much he had in common with them, especially those close to his age. They liked the same music and movies, had a similar sense of humor and shared many of the same dreams.

“Their arrival in Europe is filled with uncertainty and hatred. Their application for asylum is tenuous and difficult to pursue,” Champlin said. “Their new neighbors fear them and hate them. All they want is to live the life they envisioned growing up. They want to work, have friends and raise a family.”

For giving opportunities that support students at the Boonshoft School of Medicine, visit medicine.wright.edu/giving.