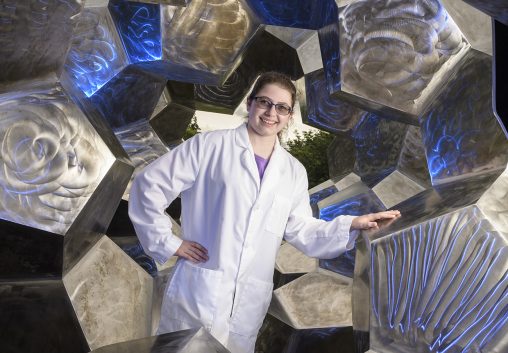 Megan Neumann, a junior biological sciences major, will spend her summer investigating the functions of mitochondria in mice.

Neumann is enrolled in the Biological Sciences Departmental Honors Program. Her research project will take longer than one academic year to complete. By taking a few summer classes, Neumann can focus on her research without a full workload. Neumann said that this is a fairly common practice among biological science honors students.

Susan Carrafiello, director of the University Honors Program, said Honors research gives students a more intense exposure to the field they would like to go into. Additionally, working closely with a faculty member can be beneficial for students who intend to go to graduate school. Students also often receive better letters of reference from their professors, Carrafiello said.

“I think it’s a win-win for students to pursue undergraduate research no matter what their major is,” Carrafiello said.

Meredith Rodgers, chair of the Biological Sciences Departmental Honors Program, said summer is a good time for students to conduct research. Because faculty and graduate students working in the labs have more free time over the summer, undergraduate students can have more opportunities to interact with them.

“It’s a great opportunity to get extra interaction,” Rodgers said. “Students can get a perspective that’s a little closer to them.”

Neumann said many of her classmates are involved in undergraduate research because it can look very good on a graduate school application.

“If you’re in biology, you kind of need graduate school,” Neumann said. “It’s a great background and it’s a great major, but it’s a major you take to get you somewhere.”

Neumann said she has always had an interest in “how things work and why they work the way they do,” which fueled a love of biology. She also considered a career in archaeology, but felt she was likely to find more career opportunities through biology.

“I want to help people, and as awesome as archaeology is, I was more likely to be helping people in a science,” she said.

Her decision to enroll in Honors was partially based on her pursuit of graduate school, medical school or both, but she also said that she wanted to challenge herself to see if she could do it.

Honors projects begin when a student chooses and is accepted by a faculty sponsor, who critiques and guides the project, helping them to improve their project.

Neumann’s sponsor is Dan Halm, a professor of neuroscience, cell biology and physiology. Neumann’s project will branch off of Halm’s research with mice lacking a particular gene. This gene codes for a “door,” called a potassium channel, in a cell, through which ions can move. Therefore, mice that lack that particular gene do not have the channel.