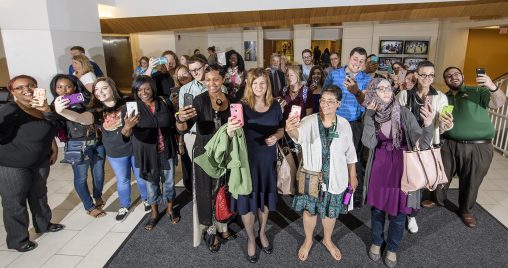 For example, when Cheryl B. Schrader was announced as the next president of Wright State in March, photos and messages began to appear on Twitter, Facebook, Instagram and SnapChat instantaneously. Many of the university’s social media account managers were in the Student Union Atrium witnessing the momentous occasion and sharing the excitement and good wishes online, while others were connected digitally, sharing and retweeting the celebratory content.

Of course, Katie Halberg, director of social media at Wright State, was in the audience streaming the event live on Facebook, all the while tweeting and sharing photos in real time. Miranda Fryman, Sarah Christy and Bruce Heintz, social media student workers who assisted Halberg, even produced a Snapchat video of President-Designate Schrader.

Schrader, herself, began posting to her own Twitter account, @WrightStatePrez, that same day. Social media is one way she has been able to keep in touch with students, staff and other stakeholders even before she joins the Wright State community. Her messages are often retweeted, building excitement for the first female president of the university.

“National Social Media Day is the perfect time to say thank you to all of Wright State’s social media managers who share our stories and engage with our many audiences all year long,” said Halberg.

“Over the last few years, social media engagement at Wright State has skyrocketed,” Halberg said. “Involvement from users across the community — and around the world — has been positive and growing.”

This engagement has not gone unnoticed, as Wright State is now nationally ranked in the 2017 Higher Ed Social Media Engagement Report by Up & Up and Rival IQ. At No. 251 in the nation, Wright State is ranked higher in engagement than major social media influencers, such as The Ohio State University, University of Michigan, Ohio University, Princeton, Yale, Harvard and many others.

“This recognition gives us added motivation to really connect with our fellow students and other community members,” said Miranda Fryman, a marketing major and student social media coordinator in the Office of Marketing.

For major campaigns and events, such as Pioneers of Potential, Day of Giving and the announcement of Wright State’s seventh president, digital assets are prepared and distributed to the university’s Social Media Managers Group (SMMG), which consists of approximately 250 university professionals and trusted students who manage one or more social media profiles on behalf of Wright State. Members represent every college, school and division, including Lake Campus, and run more than 500 social media accounts to represent Wright State online.

“They are brand ambassadors, offering a unified voice and brand across all digital platforms,” said Halberg. “Sharing information, as well as responding to questions and problems, helps build trust with their followers and provides customer service not available in the past.” 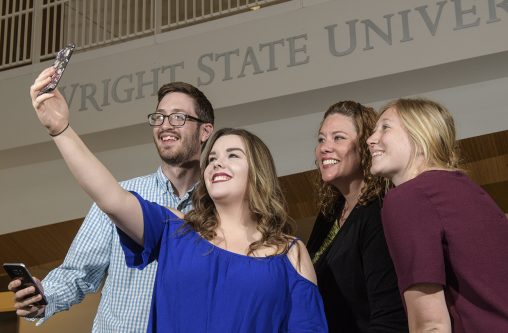 But Halberg and the other social media managers do much more than share information online; they create relationships for the future to support recruitment, retention, alumni engagement, donor support and reputation management.

Halberg schedules and leads regular SMMG meetings to go over best practices, how to start new channels and upcoming major events. As social media technology evolves, members teach and learn from each other. She promotes consistent use of hashtags, such as #wrightstate, #WrightStateRightSchool, #WrightStateGrad, as well as those created for events. She also shares analytics with the team.

“This system is our first-alert at news, crises, and engagement opportunities,” said Halberg, who coordinated the setup and adoption of Sprout Social in 2014.

SMMG and Sprout Social allow Wright State to monitor and engage with roughly 25,000 individuals per month, tracking each of the 42,000 interactions and 15 million impressions during peak months.

“Word is getting out about our innovation and leadership in social media,” Halberg added.

She has become a sought-after speaker on social engagement in higher education and recently presented at the CASE Social Media Conference in Los Angeles, alongside social media experts from the University of Michigan, NYU, George Washington University, Northeastern and the University of Nebraska. However, Halberg is quick to share the accolades with the SMMG, without whose support all of this success would not be possible.

Wright State University celebrates its 50th anniversary as an independent public university in 2017, culminating with a special Homecoming celebration Sept. 29 through Oct. 1. One can bet that its social media channels will be packed with bits of university history and Homecoming week details as this momentous occasion approaches.