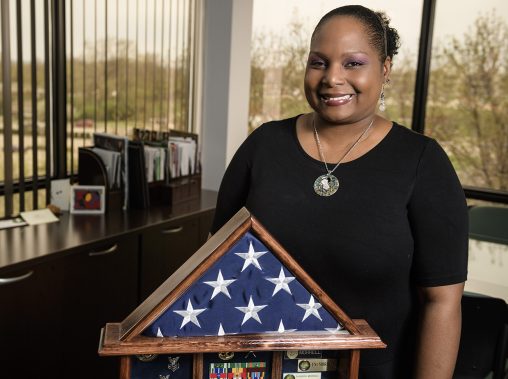 For more than two decades, Saundra-Anne Morrell made a career with the U.S. Navy, pulling duty in Japan, Afghanistan, the western Pacific and the Persian Gulf nation of Bahrain.

Today, Morrell is back home in landlocked Ohio, sailing toward her Psy.D. degree at Wright State University’s School of Professional Psychology. She is one of 701 military veterans enrolled at Wright State.

Morrell believes that the diversity of people she interacted with during her 23 years in the Navy will help her in her new career when she counsels children and their parents.

“I’ve worked with people from all over the world of all different backgrounds, different philosophies,” she said. “We had to find a common ground to get the mission done.”

Morrell grew up in the Dayton area, graduating from Meadowdale High School. After taking a military aptitude test in 1993, she was avalanched by calls from recruiters representing all of the military branches. Her parents knew she was speaking with recruiters, but she enlisted in the Navy without telling them ahead of time.

“I just made the quick decision,” she said. “I listened to everything the recruiters said, and I had already done some research on my own. So I just jumped in.”

Morrell was first stationed in Yokosuka, Japan, and later assigned in the western Pacific to the USS Boxer, a Landing Helicopter Dock amphibious assault vessel. She was among the 50 women on the 1,300-member crew and acknowledged that it was sometimes difficult being a female in the male-dominated Navy.

“We were the first set of women to go on that ship,” she said. “It was challenging, different. I wasn’t expecting it, but I survived.”

In 2001, Morrell was deployed to a station in Bahrain as a yeoman second class petty officer, doing administrative work in the Navy’s Legal Department with the staff judge advocate. She was next deployed in 2010, to a forward-operating base in Afghanistan as part of a joint Army-Navy-Air Force team, where she handled financial, mail and other administrative duties for 17 different commands.

In 2006, Morrell was hand-selected to be a flag administrative assistant for two rear admirals in the U.S. Pacific Fleet. That same year she earned her associate degree in child development from Cuyamaca College and in 2008 her bachelor’s degree from San Diego State University.

“I’ve always liked children. And I’ve always been one of those people who would listen to my friends and give advice,” she said. “Even in the military, I would have sailors come and talk to me.”

Morrell then earned her master’s degree in psychology from Pepperdine University in 2013.

“I like the idea of helping people achieve their goals and being there for them — how people’s past shape their future, their behaviors, how social context influences them, the way they think about the world,” she said. “No person is the same.”

In 2013, while serving on active duty at Littoral Combat Ship Squadron ONE, she advanced to senior chief petty officer. Later that year, she ended her active duty assignment to move back to Dayton to pursue her doctoral degree in psychology (Psy.D.) at Wright State.

“I was gone from home for about 20 years,” she said. “I wanted to be near family and start a family. I just felt a really strong pull.”

Morrell had applied to Wright State without telling her family, surprising them with the news during her graduation from Pepperdine. At Wright State, she has obtained her master’s degree in clinical psychology while pursuing her Psy.D.

“The first thing that sticks out about Wright State is the diversity training, and my program is really focused on bringing awareness of that,” she said. “We have these courses where we explore our own diversity variables, what it means to us, and then move in to examining those variables for others and what that looks like in treatment. How do we help others and take into account all of those variables?”

In 2014, Morrell was assigned as an instructor at the Navy Reserves Center for Personal and Professional Development, where she facilitated Alcohol and Drug Abuse Management supervisors and Personal Responsibility courses. She worked with military personnel ages 18-25 helping them identify their values and how their choices impact their futures and others around them — from financial responsibilities, sexual activity, drinking, respect and communication. She retired from the Reserves in November 2016.

This summer, Morrell will begin a yearlong internship in Louisville at Centerstone, a nonprofit provider of community-based behavioral health care that offers mental health services and substance abuse treatment for children, adolescents and families in collaboration with other health service providers. After graduating from Wright State, she wants to work for an agency for about 10 years before possibly going into private practice.