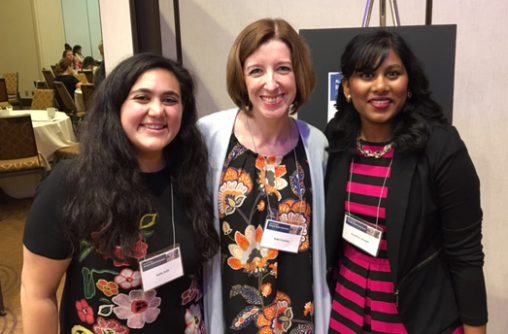 Katie Adib, left, Kate Conway and Cynthia Joseph presented research on refugee patient communities and their health concerns at a workshop at the North American Refugee Health Conference in Toronto.

Third-year medical students Katie Adib, of Dayton, and Cynthia Joseph, of Littleton, Colorado, were part of a team of researchers from various organizations led by Kate Conway, M.D., assistant professor of family medicine and director of medical education in the Department of Family Medicine at the Boonshoft School of Medicine. They presented research to an international audience of health care professionals who work with refugee populations.

Their research, “Refugee Centered Medical Home: Refugees as our Patient Leaders,” was part of Conway’s grant work with Patient Centered Outcomes Research Interest. In 2016, Conway was awarded a grant of about $15,000 to build a team of refugee patient representatives, clinicians, community stakeholders and researchers all dedicated towards improving the health care experience and outcomes for refugee communities resettling in the United States.

“This was an opportunity to share with other health professionals from around the world what we have learned,” Conway said. “We engaged participants in the conference in active brainstorming sessions and discussed working with refugee patients around the world.”

In addition to Adib and Joseph, several other Wright State medical students have worked on the research. They include Jessica Brown, Caleb Dukeman and Walid Malki. Elizabeth Wynia, a medical student at Case Western Reserve University School of Medicine, also was one of the researchers. Medical student Rinki Goswami and Fulbright scholar Ruaa Abdulkareem Hamad Al-juboori, M.D., also have joined the research team.

“Health care is a critical need for refugees, but often they become part of a growing health disparity,” Conway said. “Confusion from health care providers, refugee patients and insurance companies sustains an ineffective model of care that is costly and less effective.”

The national conference was an inspiring experience for Adib, who became interested in refugee health care partly because her family is from Syria.

“We were all quite shaken when the Syrian civil war broke out,” she said. “Because of the war, so many people have become displaced, and the plight of refugees has become an international crisis.”

She believes it is important for medical students to learn about the refugee population in the United States.

“It is a population that we are all going to treat when we become physicians,” she said. “The refugee population has different health care needs than other patients. For example, a refugee may need interpretation services, have certain mental health issues and traumas that they may not easily share and require more extensive health education.”

Joseph also found presenting at the North American Refugee Health Conference to be a motivating experience. As an immigrant, she is keenly aware of the many issues families face in obtaining health care. Her family is from India and came to the United States for her father’s job when she was 5 years old. They settled in Littleton, Colorado, near Denver.

“The biggest problem that immigrants face is understanding what preventative care is and why it is necessary,” she said. “In India, we don’t have yearly check-ups. We only go to the hospital when there is an actual problem. There is a lot of diabetes and heart disease that could have been prevented if they had taken better care of themselves and seen the doctor more often.”

“By learning how to care for vulnerable populations abroad and right here at home, our medical students will be better equipped to care for patients in a compassionate way that also gets better results for the patient and community as a whole,” she said. “By understanding how to implement best-evidence care and advocate for patients who need it most, our students will be well prepared to treat our nation’s global population.”