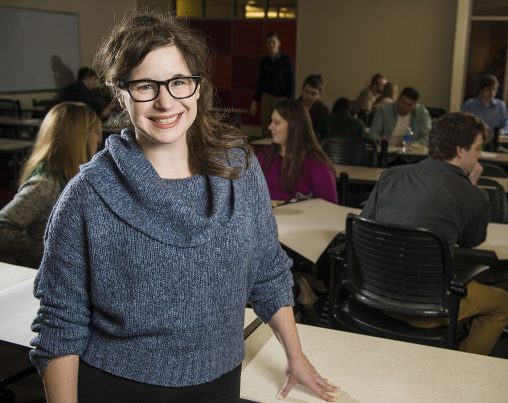 A grant from the National Endowment for the Humanities will support work by Crystal B. Lake, associate professor of English at Wright State, and a team of researchers to create an innovative scholarly digital edition of “Vetusta Monumenta,” a series of prints documenting rare antiquities. (Photo by Chris Snyder)

Crystal B. Lake, an associate professor of English at Wright State University, has received a prestigious grant from the National Endowment for the Humanities to create an online archive of a centuries-old text.

The project focuses on creating an innovative scholarly digital edition of “Vetusta Monumenta,” a series of prints that document rare antiquities published between 1718 and 1906. The website is available to scholars and the public at vetustamonumenta.org.

Lake and her project co-director, Noah Heringman, the Catherine Paine Middlebush professor of English at the University of Missouri, received a three-year $285,500 Scholarly Editions and Translations Grant.

Their editorial team also includes collaborators from the University of Regensburg in Germany, Queen’s University in Ontario and King’s College in London.

The NEH grant is part of a category of funding that supports the “preparation of editions and translations of texts that are valuable to the humanities but are inaccessible or available only in inadequate editions.”

“We are very grateful for the support, and for what it means for completing the project,” Lake said.

“Vetusta Monumenta” — which means “ancient monuments” in Latin — is a series of 336 large prints created from highly detailed copperplate engravings depicting antiquities ranging from the third to the 17th century.

Publish by the by the Society of Antiquaries of London, the prints represent a wide array of objects, including castles, coins, Roman urns, an engraved horn, portraits and baptismal fonts. Many of the original objects are damaged, have been destroyed or cannot be found, and in some cases the prints are the only representation of an object that exists today. Although the objects originated in places throughout the world, all were found in England. 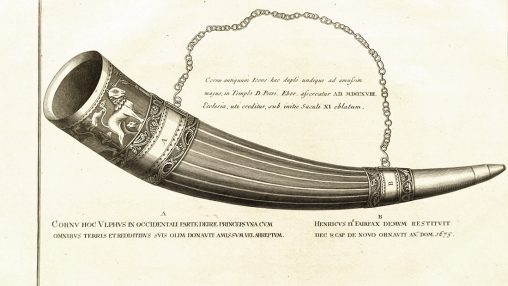 An engraving from “Vetusta Monumenta” of the Horn of Ulf, which Ulf or Ulphus, the powerful Danish earl, gave to the York minister around 1036. (Courtesy of University of Missouri/vetustamonumenta.org)

The prints in “Vetusta Monumenta” themselves are also considered artworks. “To see one of these prints is to fall in love,” Lake said. “They are stunning works of art.”

The NEH grant will help Lake and her colleagues to continue to research and make available online the first 159 prints in the series, all of which were created before 1800.

They have already scanned the prints using the latest technology. Now, they will work to translate the plates’ captions, which are in Latin, transcribe any text that accompanies the plates, and produce expert commentaries on each of the artifacts represented by the plates.

The research involved will be significant, and the grant will allow Lake to hire a graduate student at Wright State as her assistant.

The researchers must not only investigate each plate to learn more about the objects depicted, including their provenance and history, they also have to study the engraved plate, seeking to learn more about its creators and why the artifact was included in “Vetusta Monumenta.” They also try to locate where the objects are now, when possible.

The digital archive is published on Scalar, a free, open-source publishing platform.

Only 11 complete copies of “Vetusta Monumenta” are known to remain today. One of them is at the University of Missouri, where Lake completed her Ph.D. in English. Lake and Heringman’s project will not only make “Vetusta Monumenta” more accessible and better understood, its innovative software will influence other projects in the digital humanities.

“It’s both an important preservationist project and also a technologically innovative venture because we are developing new protocols and software that future researchers as well as developers will also be able to use,” Lake said.

She described “Vetusta Monumenta” as a “surprisingly forward-thinking and sophisticated work when it was first conceived of in the 1700s.” 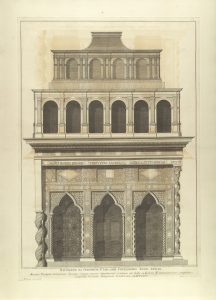 An engraving from “Vetusta Monumenta” of the Tomb of St. Edward the Confessor, king of England, at Westminster Abbey. (Courtesy of University of Missouri/vetustamonumenta.org)

Much like the 18th-century Society of Antiquaries of London, Lake and her colleagues are ensuring that “Vetusta Monumenta” and the antiquities it portrays will be available for anyone to study and enjoy.

“Our edition shares the original impulse behind ‘Vetusta Monumenta.’ Our goal is to preserve something fragile by using and hacking the most state of the art tools that we have available,” she said. “It has a nice symmetry to it.”

Wright State became an independent institution in 1967 and spent the next 50 years growing into an innovative leader in scholarly research. In 2017, it celebrates its 50th anniversary as an independent public university, culminating with a special Homecoming celebration Sept. 29 through Oct. 1.