In this second installment of the university history series on the founding faculty of Wright State University, we are spotlighting Alphonso Smith, professor emeritus of the College of Science and Mathematics.

Smith came to the Dayton Campus in 1964 to help Ohio State University develop the mathematics program at the new branch campus here, at what would eventually become Wright State University. He was one of the first faculty from Ohio State who came to help develop the new university, and like many of the others of that period, he had planned to stay only a few years, but ended up staying for his entire career at the university that he helped build. 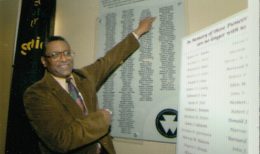 Alphonso Smith, professor emeritus of the College of Science and Mathematics

Through these interviews you get the true sense of what it was like for these original faculty pioneers, and what it meant to them to help create this new university and watch it grow.

You can explore the history of Wright State through their memories of this period as captured through the WSURA oral history project. In the video clip above, Smith describes the first year at the new school and the special relationship that began to develop among the original faculty.