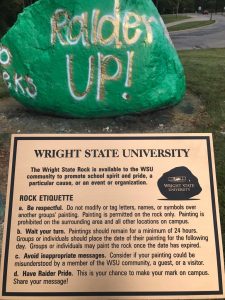 Wright State University has added a sign to a rock that caused some campus controversy last fall.

In September, the rock was painted by students to say “Black Lives Matter.” Shortly after, the word “black” was changed to “white” and later to “all,” causing some controversy.

The controversy led to a march through campus to the rock which students repainted again with the word “black.”

The sign, which has apparently been in development since last fall, was a direct response to the September incident, said Gary Dickstein, vice president for student affairs. The sign was placed in front of the rock Thursday and Dickstein posted a photo of it on Twitter this morning.

“The creation of the sign was designed to relay to our students who paint the rock why we have it, what are our community expectations for painting it and encouraging them to promote positive messages that bring pride to our campus,” Dickstein said via email. “The genesis for the idea did result from students last year painting over others messages as well as painting messages that were incongruent with our mission.”

The sign dictates what it refers to as “rock etiquette.” It asks students to be respectful, avoid painting the rock with inappropriate messages, allow a message to be on the rock for a minimum of 24 hours and to “have raider pride.”