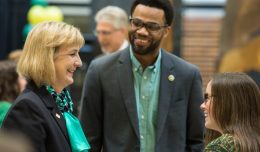 WSU president Cheryl Schrader sent a message to counter “negative speech” and “hateful action” on campus, while also being willing to engage in “difficult yet civil and productive conversations with others who believe differently than you do.”

The message, sent out on the first day of classes, comes just a few weeks after the violence in Charlottesville, Virgina.

“As we celebrate the beginning of another year, many of us are also wrestling with the impact of the recent actions of others in Charlottesville, Virginia,” Schrader wrote. “Acts of racism, anti-Semitism, violence, and hatred continue to exist in our country. Let me be clear: Hateful actions and speech are not welcome at Wright State University.”

In the email, Schrader encouraged people to report incidents via the university’s anonymous reporting system or through the Wright State Office of Equity and Inclusion by emailing oei@wright.edu or calling 937-775-3207.

Schrader’s message was not prompted by any incidents on campus, said WSU spokesman Seth Bauguess. But, it comes just days after Wright State added a rules sign to a rock last year that caused some free speech and racial controversy on campus.