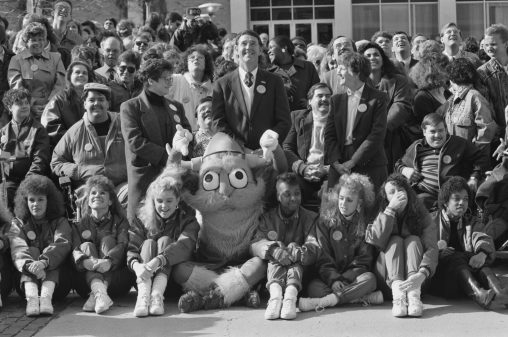 Wright State celebrates its 50th anniversary as an independent public university in 2017, culminating with a Homecoming celebration Sept. 29–Oct. 1. This image features Paige Mulhollan, third president of Wright State, and Rowdy Raider with a group of students, faculty and staff. (Photos courtesy of Wright State Special Collections and Archives/CORE Scholar)

Wright State University began to shine in the 1980s, winning several awards in various areas as well as creating its first mascot and writing its Alma Mater.

The men’s basketball team won the NCAA Division II national tournament in 1983 under the direction of coach Ralph Underhill.

One of Wright State’s biggest achievements in the 1980s came when the Model United Nations team won the top award at the National Collegiate Model United Nations. It began a winning streak that continues today — nearly 40 years later— and is unparalleled by any other university in the country.

Not only did Wright State receive several awards, it also began to give them. The first Outstanding Alumni Achievement Award was granted in 1983 to David Gutridge, the senior vice president and chief officer of Dayco Corporation. The award honors a graduate who has made a significant personal or professional achievement. Wright State added more awards in later years, such as the Honorary Alumnus Award, the Alumna of the Year Award and the African American Alumni Society Award of Excellence, among others. 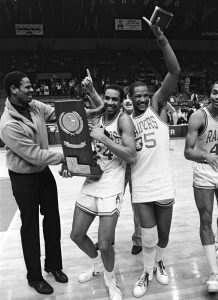 In 1985, Wright State’s Alma Mater, composed by faculty members Thomas Whissen and David Garrison, was performed for the first time at commencement.

Paige Mulhollan was appointed the university’s third president in 1985. He was best known for shaping Wright State’s mission as a metropolitan university dedicated to service and leadership to the Dayton area, including providing leadership in addressing the education, social, cultural, economic and technological needs of the Miami Valley.

In 1986, Rowdy Raider was unveiled as the university’s official mascot — a red-bearded Viking. He would later morph into a brown wolf in 1997 and then a gray wolf in 2007.

The College of Education and Human Services and Dayton Public Schools agreed to operate the E.J. Brown School in 1987. The school was described as a “learning, living laboratory.”

1987 also marked Wright State’s 20th anniversary, which was celebrated not only by the campus but also by Lt. Gov. Paul Leonard. In the same year, Wright State’s Lake Campus added the Crown Amphitheatre and the marina. These buildings take advantage of the beautiful setting of the lake campus and proximity to Grand Lake St. Marys and add a further dimension to the many possibilities for students at the Lake Campus.

In 1989, the School of Professional Psychology opened the Ellis Institute for Human Development to provide a community mental health training center serving Dayton. It provides state-of-the-art training, service and research.