DDN story on Wright State: From one-building branch campus to 50 years of service 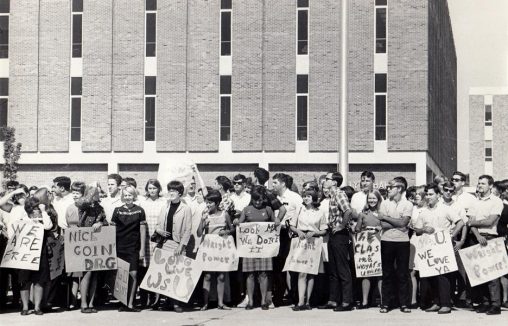 Dr. Brage Golding, the first president of the university, told the inaugural freshman class, You have a rather exciting prospect ahead. You will have a hand in the shaping of the only brand new state university in the Middle West in a number of years. Other universities have been started. This is the only one that is brand new. DAYTON DAILY NEWS ARCHIVE

The community, anticipating a need for an increasingly educated workforce, rallied together in the early 1960s to set Wright State University on a path from one-building branch campus to 50 years of service as an independent university.

Leaders raised $3 million to get the new branch off the ground, according to Wright State’s historical narrative. An early design concept for the “urban university,” detailed in the Dayton Herald in 1964, described a future campus with a “pedestrian green-way, court game activities and an ice rink.”

A proposed master plan, designed by Ohio State’s Arnall T. Connell, showed a “futuristic-appearing elevated stadium standing next to an arena” at the east end of campus. Both stadiums were designed to be square in shape “because in a round stadium there are no good seats anywhere,” said Connell.

Ground was broken in a corn field on the 618-acre site for the first building, Allyn Hall, in 1963. The following year the Dayton Herald documented the opening of the building under the headline, “Branch U Opens For Study; Dayton’s Dream Comes True.”

As the American flag was raised over Allyn Hall for the first time Sept. 8, 1964, the Dayton campus of Miami University and Ohio State University was filled with 1,074 full time students who had paid $200 for tuition, according to a story in the Dayton Herald.

“This is a rather unique situation we have – the first class in a new university,” L. Robert Hughes, a history instructor, told a class. “It inspires me that the community has worked together to create a university. We are setting precedent this year. We have no traditions, no school colors, no football team to cheer.”

The branch campus grew quickly. Bulldozers started clearing land for a the second structure, a science building, as the first classes at Allyn Hall got underway. 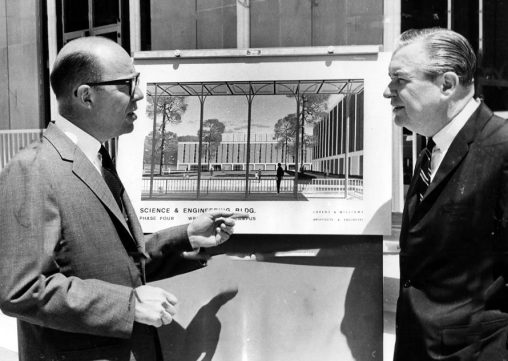 Robert S. Oelman, chairman of the Wright State university advisory board and Ohio Gov. James A. Rhodes view architect’s sketch of a new science and engineering building at ground breaking ceremonies held in June 1966. It was the the start of the fourth building on the campus. DAYTON DAILY NEWS ARCHIVE

Construction began on the fourth campus structure in 1966, and that $3 million science and engineering building completed the fourth side of the first courtyard on campus.

At the groundbreaking, Ohio Gov. James Rhodes predicted Wright State had “the greatest potential of any of our new universities in America.” The following year, 5,704 students enrolled, breaking the threshold for independent status.

Dr. Brage Golding, the first president of the university, told the inaugural freshman class, “You have a rather exciting prospect ahead. You will have a hand in the shaping of the only brand new state university in the Middle West in a number of years. Other universities have been started. This is the only one that is brand new.”

HISTORY EXTRA is a weekly pictorial history feature showcasing the Miami Valley’s rich heritage. If you have a unique set of historic photos found in your parents’ or grandparents’ attic that depicts the past in the Miami Valley, contact Lisa Powell at 937-225-2229 or at Lisa.Powell@coxinc.com.