Proud to Wear the Green and Gold 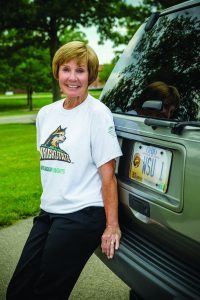 My grandfather was born “on campus” on June 29, 1895, in the original Rockafield House, which his parents rented from Mr. Rockafield. My grandfather owned land on both sides of Airway Road (now Colonel Glenn Highway), mostly on the south side—186 acres total. On the Wright State side of the road, he owned part of the woods up to the cemetery and through where the Nutter Center is located. My uncle John and his family lived on a farm where the Nutter Center is now located.

Fred White negotiated with my grandfather during the sale of the land to Wright State. During the construction of the original buildings, my grandparents and my family would drive around campus to see the progress.

I met Don Mohr, Wright State’s first director of financial aid, when I was a senior at Beavercreek High School in 1967. As a student employee, I worked in various offices, including the admissions office for Dr. C. DeWitt Hardy. I helped during registration many times when it was held in the Allyn Hall cafeteria. We had sheets with the maximum available number of students. When students came up to register for a particular class, we would X out the seat in that class and sign their registration card—no computers then!

Wright State was still a branch campus when I arrived. My student paychecks were from Miami University; I made $1 per hour! I started to work full time in the financial aid office in 1969. It was incredibly fulfilling. I met really terrific students and parents, and it was a good feeling to be helping in any way we could.

When the program grew to the point where Mr. Mohr had to choose between financial aid and athletics, he chose athletics and asked me to go with him. When we started athletics, the equipment was stored in four cabinets behind my desk. Mr. Mohr and I would take the student-athletes’ dirty laundry home to wash. 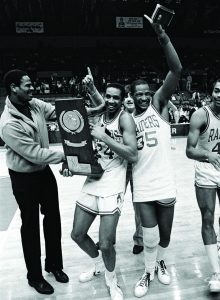 Everything was new at Wright State, so building all the programs was an exciting challenge for the students and the administrators. It was a true privilege to work alongside people like Don Mohr, John Ross (our first basketball coach), and Jim Brown (our assistant basketball coach). Our staff’s first concern was always the welfare of our student-athletes. The highlight was attending all the tournament games when we won the Division II national championship in basketball in 1983. It was an incredible accomplishment for such a young program.

The student-athletes were our reason for going to work every day and working really long hours. Parents sent their kids to us and left them in our care—one mom actually looked Mr. Mohr and me in the eyes and said, “I’m trusting you to take good care of my boy.” He was about 6-foot-4 and very muscular—he did just fine!

I still see former athletes at the basketball games. It’s really fun to see them with their own families so many years later. We had a fascinating group of athletes over the years, from many countries and a vast number of backgrounds. Early on, we had one soccer player from Thailand who didn’t want to live in the dorm; he preferred living in the woods. Needless to say, he had to be convinced the dorm was a better option!

It was truly a cross-section of the population that came together to form one incredibly close family. They molded together to create teams with a common goal. All were proud to wear the green and gold to represent Wright State.

I think you would know how I feel about Wright State if you saw my car. My license plate is WSU1.

Susan (Barr) Gayle was the business manager for Wright State’s athletic department from 1970 to 1998.