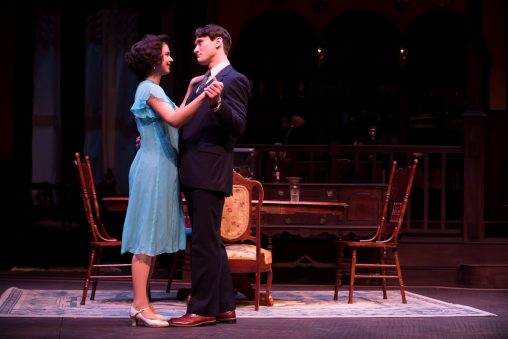 Wright State Theatre’s production of the Pulitzer Prize-winning comedy “You Can’t Take It With You” runs in the Festival Playhouse from Sept. 28 to Oct. 8. (Photos by Erin Pence)

Wright State University Theatre opens its 43rd season with the Pulitzer Prize-winning comedy “You Can’t Take It With You” in the Festival Playhouse in the Creative Arts Center.

“You Can’t Take It With You,” by George S. Kaufman and Moss Hart,” won the Pulitzer Prize for Drama in 1937. It opened on Broadway the previous year and played for 838 performances. A popular film adaptation starring James Stewart and Ann Miller and directed by Frank Capra won Academy Awards for Best Picture and Best Director in 1938. A 2014 revival on Broadway was led by James Earl Jones in the role of the family’s wise patriarch.

The comedy features two polar-opposite families about to be joined through marriage. When Alice introduces her boyfriend Tony Kirby and his Wall Street parents to the eclectic Vanderhof family at a dinner gathering things get awkward. At the end of the day, however, the audience is reminded of what really matters.

Dayton Power and Light is the opening play presenting sponsor for the 2017-2018 theatre season.

Wright State became an independent institution in 1967 and spent the next 50 years growing into an innovative leader in the performing arts. In 2017, it celebrates its 50th anniversary as an independent public university, culminating with a special Homecoming celebration Sept. 29 through Oct. 1.

Photos from “You Can’t Take It With You”: