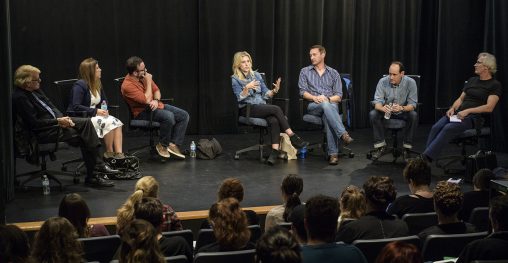 The graduates — who volunteered to pay for their own travel to Wright State — spent Oct. 20 conducting workshops on such topics as “Acting for Camera,” “Theatre in Western Culture” and “Working and Building a Career (and Life) in Los Angeles.”

Tim Brown, a stuntman who graduated in 1989 with a B.F.A. in acting, also led a session on “On-Camera Combat” with students taking a theatre combat course.

“There’s nothing like having a group of accomplished actors, writers, producers and filmmakers giving back to this school,” Deer said. “Everyone was so excited to see what they had to offer and what they had to share about their careers and the kinds of careers our current students might have.”

The alumni who participated in the visiting artists event were:

Tricia Small, who graduated with a bachelor’s degree in theatre studies in 1992, has been a producer for more than 20 years. She was executive producer and writer on WGN’s “Salem” and is working on TNT’s new comedy “Highland.” Her film production credits include “Mothers and Daughters,” “The Gymnast” and “How to Ace an Intervention.” On the stage, she starred in “The Last Five Years,” “Sunday in the Park with George” and the off-Broadway drama “No Wake” with Wright State alumnus Stef Tovar, who also participated in the workshops. 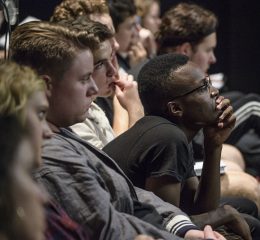 The workshops concluded with a talkback session with the five visiting artists for students majoring in acting, musical theatre, theatre studies and motion pictures.

Tovar is the founder and artistic director of Route 66 Theatre Company in Chicago and an award-winning professional actor. He has performed in the company’s production of “No Wake” and “A Twist of Water” and on the television show “Chicago Fire” and in the films “The Gymnast, ” Contagion” and the upcoming “Widows.”

Andrea Bendewald, who received a bachelor’s degree in acting in 1992, has appeared in more than 30 television shows and films, including “CSI Miami,” “Seinfeld,” “Friends” and “Suddenly Susan.” She was nominated for an Ovation Award for her performance in “Girls Talk” and was selected to perform her one-woman show “Above and Beyond” at HBO’s Aspen Comedy Festival. She is also a sought-after acting coach.

Fargnoli is a Los Angeles-based director of photography whose latest project is season two of the Netflix comedy series “Lady Dynamite.” He has also photographed six seasons of “The Mindy Project” and six seasons of the Emmy-winning Adult Swim series “Childrens Hospital.”

Brown is an actor and combat choreographer who has performed stunts on numerous television shows and movies, including “Thor,” “Resident Evil: Extinction” and “The Defenders.” He has taught stage combat and stunt fighting for more than 20 years at the American Musical and Dramatic Academy in New York City and Los Angeles.

The day of workshops concluded with a talkback session with the five visiting artists for students majoring in acting, musical theatre, theatre studies and motion pictures. It was led by W. Stuart McDowell, artistic director of the Department of Theatre, Dance and Motion Pictures, and Bruce Cromer, professor of theatre arts. 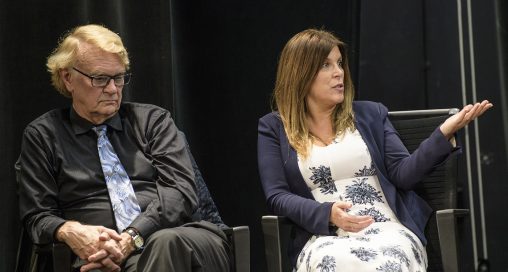 Tricia Small, who has been a film, television and theater producer for more than 20 years, helped organize the workshops with W. Stuart McDowell and others in the Department of Theatre, Dance and Motion Pictures.

Their wide-ranging discussion covered such topics as career advice, sexual harassment and abuse in the entertainment industry, approaching acting as a career and balancing work and life.

Bendewald discussed how her career has evolved from acting to coaching, teaching and volunteering. “A modern actor in Los Angeles is expected to be more than an actor,” she said. “All of us have multiple careers.”

Tovar told students how he organizes a monthly reading series with Chicago actors, calling it a chance to “get together and flex those muscles and read a great script.”

“There’s no one path,” Brown said. “I firmly believe in the marathon-not-a-sprint cliché.”

Bendewald shared that her one-woman show “Above and Beyond” — which she originally created as a Wright State student — helped launch her career when it was noticed by HBO, leading to a role on “Suddenly Susan.”

“It started right here and I was using it as my currency,” she said.