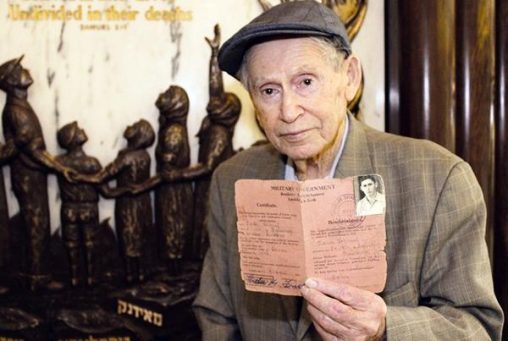 Samuel Heider, a 93-year-old Holocaust survivor, will give a lecture at Wright State on Nov. 7 at 7:30 p.m.

Samuel Heider is a 93-year-old Holocaust survivor. He was transferred between concentration camps throughout his life, avoiding gas chambers and protecting his family’s last mementos.

Students, faculty and staff can hear his story at the Wright State Holocaust Commemoration on Tuesday, Nov. 7, at 7:30 p.m. in the Discovery Room (E163) of the Student Union.

Heider’s lecture, which had to be rescheduled, is titled “A Holocaust survivor remembers” and is free and open to the public.

“He’s an extraordinary individual. He has all sorts of miracle stories of how he survived,” said Mark Verman, associate professor of religion and the Zusman Chair of Judaic Studies at Wright State.

In 1941, Heider and his family were deported to a small camp outside of Warsaw, Poland. Heider was soon separated from his family and was the only person in his family who was not killed by the Nazis.

“All of his immediate family died during the war, but he survived,” Verman said.

“He had to pinch his cheeks so he would look healthier so Mengele would send him to a labor camp instead of a gas chamber,” Verman said.

The only memento Heider had of his family was a picture of his sister, which he kept under his arm.

“He was afraid that Mengele would ask him to raise his arms, and if so, he would lose the picture, but he was able to save the picture,” Verman said.

After his time at Auschwitz, Heider was transferred to Dachau concentration camp before he was liberated and transferred again to a displaced-persons camp known as Landsberg in Germany.

“For me, the takeaway lesson is that life is just so tenuous, that it’s like being on a tightrope,” Verman said. “Some people are able to maintain their balance and get from one place to another, but it’s so easy to fall off.”

The lecture event is co-sponsored by the Zusman Chair in Judaic Studies, the Department of Religion, Wright State’s Honors Program, the Frydman Educational Resource Center and the Dayton Holocaust Resource Center.