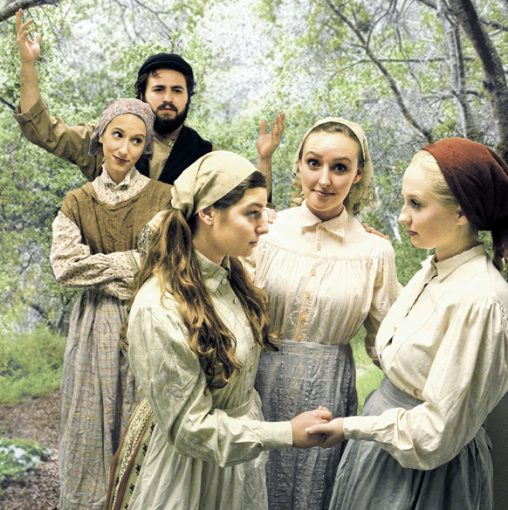 It’s the first run-through for Act I, only three weeks from opening, and members of the production team can’t help breaking up with laughter at the homespun quips that volley in front of them.

“From such children come other children,” Yente the matchmaker informs the long-suffering Golde, wife of Tevye the dairyman and mother of five daughters.

At next week’s Act II run-through, the laughs are fewer, the dialogue more bitter. Tevye tells Golde their daughter Chava “is dead to us. We will forget her.” Absolute silence in the rehearsal hall.

Wright State University Theatre’s season enables students to strengthen their crafts as performers and artisans. And through the theatre’s affiliation with the national Ghostlight Project, this season, students are learning to stand up for inclusion, participation, and compassion — specifically as they explore the refugee experience.

For Wright State’s November production of Fiddler on the Roof, the four Jewish students in the cast found themselves in the roles of teachers as well.

“I’ve been waiting for this show for a very long time, and my family loves this show and I’ve grown up with the music,” says Kayli Modell, a junior musical theatre major from Rockville, Md., who was cast as the oldest daughter, Tzeitel.

“I wanted to make sure everyone was as knowledgeable as possible to make sure that this show is authentic,” says Modell, who describes her background as a blend of Reform and Conservative Judaism.

It occurred to her that when the musical number Sabbath Prayer comes in the show, cast members might think of it as just a song.

“But to Jewish people, it is every Friday night and Saturday,” she says. “I invited anybody in the cast to come with me twice at the beginning of the school year, and they came with me to the two Reform synagogues, Temple Israel and Temple Beth Or for Friday night Shabbat services. A lot of them got to see the Torah for the first time, which was really awesome, and we explained to them different customs, a little bit about how to read the Siddur (prayer book).”

Modell also brought the Shabbat experience to rehearsal. “I brought challah, some candlesticks, and a water bottle for the wine, and we said the three blessings, and I handed out papers that everyone could read.”

Joshua Beasley, a junior acting major from the Cincinnati suburb of Wyoming, plays the lead role of Tevye in the production. As a freshman at Wyoming High School, he played Lazar Wolfe the butcher.

Beasley says that when he shared with the Wright State cast how Judaism relates to his life, some were surprised to find out he is a Jew. “A lot of people just have not been exposed to it.”

Dr. Stuart McDowell, Wright State Theatre’s artistic director and Fiddler’s director, says that about half of the cast were familiar with the show or had been in a previous production. When he cast Fiddler last spring, homework came with each part.

“They were sent home over the summer to do research on their characters, and to do in-depth research on the Jewish community in the Pale of Russia, in the Ukraine,” McDowell says.

He asked the Jewish cast members to share what they knew about their families before summer break, but also to undertake additional research.

“The rest of the cast also did autobiographical work to find out what their roots were,” McDowell adds. “It was pretty profound, because most of them found they were also immigrants at one point or another. A lot of these students’ families came over in the 19th century, the 18th century, and they had parallel stories, because everybody who came over was a minority when they came to this country.”

McDowell said his aim was to raise their consciousness about the world refugee situation.

“It’s bigger than any time in recent memory. This is the theme of our story, the huge refugee problem of our lifetime.”

Beasley identified a direct ancestor who was in Belarus in 1905 during the pogroms, the same period depicted in Fiddler.

“He came over to America,” Beasley says of his relative. “A lot of this story (Fiddler) is my story. And specifically for this role, because I am Reform and this is different than Reform Judaism, I looked into more Orthodox practices and integrated them with my own understanding and beliefs.”

When Mallory Kraus of Cincinnati was 8, she played the youngest of Tevye’s five daughters at Loveland Stage Company. She grew up a familiar face at Temple Sholom, Isaac M. Wise Temple, and Rockdale.

“And I remember even as an 8-year-old, the most visceral feeling in the world, especially Anatevka. I felt in the world of my heritage and what that meant,” says the junior acting major, who understudies Yenta.

“It’s so interesting to see it coming to life now at this age, and coming to terms with my Jewish identity, what Judaism means to me and to be living in this world,” Kraus says. “Judaism, to me, is not only a culture but a way of life. It’s morale, but it’s family. I can’t describe what Judaism is, more than I can describe what it does. I feel like to be Jewish is a verb. The noun is the understanding it, but the verb is to practice.”

She says she understands her Judaism as that of the ancient Rabbi Hillel, who explained it as, “What is hateful to you, do not do to your neighbor. That’s the whole Torah. All the rest is commentary. Now go and study.”

Modell, Beasley, and Kraus have all been to Israel on teen trips sponsored by the Reform movement’s North American Federation of Temple Youth. Beasley and Kraus met on their trip and have been friends since. Modell also joined a Birthright Israel trip last summer.

“The last four years or so, I’ve kind of struggled with where I fit in with my Judaism, not really sure I believe in the religion itself or if I’m more culturally Jewish,” says Modell, who attended High Holy Days services at Temple Beth Or and the Jewish Cultural Festival at Temple Israel. “I definitely resonate a lot more with the culture and the history of my ancestors. When I go to temple, I don’t know if I necessarily resonate with the religion part of it, but I resonate with hearing the prayers.”

She says Birthright made her realize how much she missed having Shabbat, “doing that every Friday night, just little things incorporated into my life as the Jew that I want to be now.”

Kraus says she’s waiting to hear back from Birthright to join its LGBTQ trip over winter break.

“Every time I put myself back in a Jewish space and then back to the space where I am, I’m then again a stranger,” Kraus says. “It always enlightens me, makes me feel like — no, Judaism is my place. That’s my little twinge. That’s what makes me different, and I like that.”

Beasley says he’s trying to get on an upcoming Birthright trip with Aaron Roitman of Louisville, who plays Motel in this production.

At the beginning of his research on Fiddler, Beasley wanted to figure out what Judaism actually is, to understand it for himself.

One source, a video, caught his attention. It’s conclusion: we are a family.

“I’ve been trying to incorporate into my work the importance of community and family,” Wright State’s Tevye says, “how the whole circle of our little village is a family that all works together — it’s very dysfunctional — but it promotes an atmosphere of love.”

At present, the Jewish Jews of Wright State’s Anatevka note there’s little in the way of Jewish life on campus outside of this production.

“I often feel like a stranger in a strange new land here, definitely,” Kraus says.

“We don’t have a Hillel or Chabad,” Modell says. “It’s not a small population, this school, but it is a commuter school. People have asked me to start a Hillel, but I’m not the person to do that. But it’s definitely nice that I have somewhere to go for the High Holidays, and that’s what’s important to me, that I have found Reform congregations in the area and places for me to go when I just need to dive into my culture.”

Wright State University Theatre presents Fiddler on the Roof, Nov. 2-19 in the Creative Arts Center Festival Playhouse. Tickets are $22 adults, $20 for students and seniors, and are available by calling the box office at 775-2500 or click here.