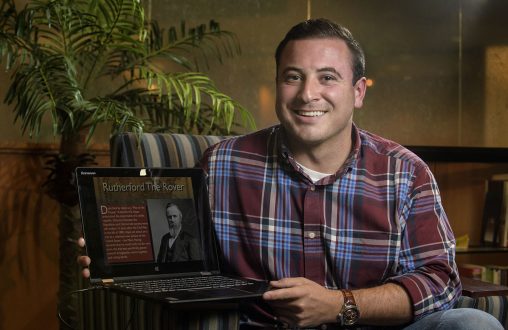 Erix Infante, a graduate history student at Wright State, created an exhibit on President Rutherford B. Hayes at his presidential museum in in Fremont, Ohio. (Photo by Erin Pence)

When he began the project, he didn’t know much about President Rutherford B. Hayes. But when he finished, Wright State University history student Erix Infante had produced an exhibit fit for showcasing at the Hayes presidential museum.

The museum was scheduled to host a traveling exhibit on President James Monroe in August and wanted a three-paneled side exhibit on Hayes to be displayed with it. Infante had taken an exhibit design course at Wright State and fell in love with the creative part of it. But he had never produced an exhibit for the public.

The museum curators outlined the main points they wanted the exhibit to make but otherwise gave Infante free rein. He had to create the whole exhibit, writing the text and selecting photos.

Infante began to research Hayes at the museum archives, traveling from his family home in Amherst, Ohio, west of Cleveland to Fremont three days a week.

“The artifacts and information they have there is quite overwhelming,” he said. “They have every scholarly report ever written about Hayes.”

Hayes was the first sitting president to travel to the Far West, an effort to try to unify the nation following the Civil War. The exhibit focused on that 71-day trip through Washington, Oregon, California and other states.

Infante unearthed colorful tidbits from the trip such as accounts of citizens from Roseburg, Oregon, hurriedly furnishing a temporary home for Hayes, donating rugs, silverware and chandeliers; the two golden nuggets Hayes received as gifts during his stop at a gold mine in Cherokee, California; and a nail-biting presidential convoy through Apache territory.

The goodwill trip produced a lasting trail of monuments, museums and libraries named after Hayes.

“It had a really large impact on the people out there,” said Infante.

Infante spent 101 hours over a month-and-a-half creating the exhibit, which became his master’s degree capstone project. When he was finished, there were three panels nearly seven feet tall, 1,000 words of text, and juxtaposed photos featuring people, landmarks and newspaper clippings from Hayes’ trip.

“I wanted to make something that wasn’t overly scholarly, but I didn’t want to dumb it down,” said Infante. “I wanted the average person on the street coming into the museum and learning something.”

The exhibit was on display at the museum with the Monroe exhibit through the month of August.

“Museum officials were really pleased at how it came out; I was really proud,” said Infante. “I was really excited that my hard work was able to educate a lot of others who came there who may have never known about this side of Rutherford B. Hayes or Hayes in general.”

Infante was born in New Jersey but grew up in Amherst. His mother, who has a master’s degree in library and information science, is director of the Grafton/Midview Public Library. She helped her son develop a love for history and research.

“She always showed us the importance of libraries — the endless amount of information you can get from the library and how to utilize it,” Infante said. “I would definitely say I picked that up from her.”

When Infante was a boy, he would get the neighbor kids together for history boot camps.

“I would teach them about history,” he said. “There was one time we even bought these dehydrated meal packages from an Army-Navy store. And I’ve always enjoyed museums.”

After graduating from Marion L. Steele High School in Amherst in 2008, Infante studied public relations at Seton Hall University in New Jersey for two years before transferring to The Ohio State University, where he studied history. He interned at the Columbus Jewish Historical Society and at the Senator John Heinz History Center in Pittsburgh.

After graduating from Ohio State in 2013 with a bachelor’s degree in history, he worked for U.S. Steel in Pittsburgh and then as a title abstractor for an oil and gas association in western Pennsylvania.

“I used a lot of my research background — a lot of archives digging and going through courthouses,” he said.

Infante decided to pursue a master’s degree in public history and after visiting several universities enrolled at Wright State in 2016.

“I never felt totally confident in any school’s program aside from Wright State,” he said. “I walked away with absolute certainty that this is the school I wanted to attend.

He is set to graduate in the spring with a master’s in history and a concentration in public history.

“I really, really enjoy the professors and how eager they are to speak with you, sit down with you and help you figure out the path you’re about to take,” he said. “They so helpful and they’re so friendly and they’re passionate about seeing you succeed.”

Infante currently volunteers in the exhibits division of the National Museum of the United States Air Force. He can see a career of working with exhibits and artifacts at such a museum.

Wright State became an independent institution in 1967 and spent the next 50 years growing into an innovative leader in student success. In 2017, it celebrates its 50th anniversary as an independent public university.