M.D./Ph.D. student chosen to serve on AAMC Board of Directors 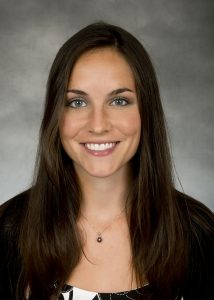 Marie Walters is an M.D./Ph.D. student at the Wright State University Boonshoft School of Medicine.

The Association of American Medical Colleges (AAMC) selected Marie Walters, an M.D./Ph.D. student at the Wright State University Boonshoft School of Medicine, to serve as the medical student representative on its 2017-2018 Board of Directors.

Passionate about advocating for medical students, Walters has been active with the AAMC, serving as an AAMC representative since 2013. She served as the chair to the Central Region on the AAMC Organization of Student Representatives Administrative Board in 2015 and then worked as the liaison to the AAMC Committee on Student Affairs in 2016.

She has attended national and regional meetings and worked with students, medical school deans, program directors and other student affairs staff.

“Being on the Board of Directors will be an extension of my current role,” Walters said. “I will be able to advocate for medical students nationwide at the highest level of the AAMC.”

At the Boonshoft School of Medicine, Walters has established herself as a respected leader among her peers, professors and school administrators.

“Her signature achievement during her tenure at Wright State University has been the founding and visionary leadership of the successful Boonshoft Pride group,” said Gary L. LeRoy, M.D., associate dean of student affairs and admissions and associate professor of family medicine at the Boonshoft School of Medicine. “This student-led organization promotes awareness of health care issues unique to lesbian, gay, bisexual, transgender, questioning and allies (LGBTQA) populations.”

Walters’ vision of Boonshoft Pride came out of an AAMC meeting, where she attended a roundtable discussion about programming that LGBTQA organizations held at other medical schools. “I realized that we did not have such an organization,” she said. “So, I started Boonshoft Pride from those AAMC conversations. I have been inspired by the people I have met at the AAMC.”

In November 2016, Walters and others from Boonshoft Pride showcased a poster about the new organization at an AAMC meeting in Seattle.

When she was 14, her father suffered a debilitating heart attack that left him with permanent brain damage. In addition to her mother, she and her three siblings became her father’s caregivers.

“His biggest symptom is memory loss,” she said. “I saw firsthand how someone can change overnight.”

She attended high school in Dayton at Miami Valley School, an independent college preparatory school, on a full-ride scholarship. From there, she went on to Emory University, where she earned a bachelor’s degree in neuroscience. At Emory, she worked in an Alzheimer’s patient unit.

“It fueled my passion to help other families,” she said. “I knew firsthand how small changes can improve quality of life.”

She earned a master’s degree in neuroscience at the University of St. Andrews in the United Kingdom and returned to Emory to work as a research coordinator in the Department of Neurology at Emory. She always thought she wanted to be a neuroscientist. But her role at Emory introduced her to M.D./Ph.D. professionals.

“I saw that I could work with people in the clinical setting and do research,” she said.

So, at age 24, she looked for M.D./Ph.D. programs and applied to the Boonshoft School of Medicine.

“Faculty members at Emory encouraged me to look at the Boonshoft School of Medicine,” she said. “I was blown away by the research and the culture.”

She is receiving a significant scholarship to cover medical school and Ph.D. tuition.

“The reduced financial burden for me has made medical school significantly easier than my undergraduate studies where I was constantly working other jobs,” said Walters, who is starting her fifth year of the seven-year M.D./Ph.D. program. “I am extremely grateful for the relief that scholarships afford me, and I hope to pay it forward to students in the future when I am a physician.”

After she graduates in 2020, Walters would like to pursue a residency in neurology. As part of her Ph.D. studies, she is researching neurophysiology, a branch of physiology and neuroscience that focuses on the study of the functioning of the nervous system. After residency, she would like to work in health care administration or policy.

“That’s why this position at the AAMC is exciting for me,” she said. “In my career, I hope to work with leaders and legislators to improve health care nationwide.”