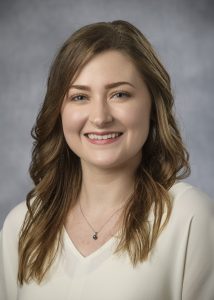 Jessica Myers, a two-time Wright State grad, is a first-year student in the Boonshoft School of Medicine’s Combined M.D./Ph.D. Program.

Jessica Myers, a first-year medical student at the Wright State University Boonshoft School of Medicine, has been awarded a one-year Boonshoft Scholars Scholarship. The scholarship recognizes an entering student who exemplifies compassion, has leadership experience and has financial need.

Myers is in the Combined M.D./Ph.D. Program, a joint program administered through the Boonshoft School of Medicine and the College of Science and Mathematics. The program reflects the strong interrelatedness of scientific disciplines in medical research.

The M.D./Ph.D. dual-degree program is a perfect fit for Myers. Since childhood, she has always been interested in science. Her favorite TV show was “Bill Nye the Science Guy.”

“I have always been a science nerd,” said Myers, who is from Dayton. “In medicine, you get to work with people and apply your knowledge of science.”

She studied hard in high school but also had to work to help her family. Her parents divorced when she was young. Her mom did all she could to support Myers and her two sisters. But times were financially difficult. So, Myers began working in retail and restaurants.

“I worked during high school and helped pay bills,” said Myers, who graduated from Kettering Fairmont High School in 2009. “It was hard, but it was very motivating. Hard work pays off.”

Because of her life experience, she has learned to respect others’ hardships and be there for them. “Having had experiences in which I struggled, I feel like I can put myself in their shoes,” she said. “I can identify with their feelings and not judge them.”

Myers’ interest in a medical career began as a teenager. “I had a lot of health issues because of abdominal pain. I couldn’t eat, and I lost weight,” Myers said. “I saw a lot of doctors, and I noticed the difference between doctors. Having a compassionate doctor made a difference.”

That experience influenced her decision to pursue a career in medicine. She chose to attend Wright State University, where she majored in biomedical engineering. While she had some scholarships, she continued to work all throughout her undergraduate years to pay for college.

“During my undergraduate years, I worked about 30 hours a week in retail and food service,” she said. “I was working so much and going to class. Sometimes, I only had $5 until Friday.”

In 2012, she started a research job at the Wright State Research Institute (WSRI), where she worked as an undergraduate assistant. She worked on a project focused on neuroscience and medical imaging and explored how the brain works. She also worked on other research projects in the lab of David R. Ladle, Ph.D., associate professor, in the Department of Neuroscience, Cell Biology and Physiology.

During her junior year of college, she volunteered in the Emergency Department at the Soin Medical Center. She had an aha moment when a nurse asked her to help calm a patient down.

“The girl was very upset. She was screaming and crying,” Myers said. “She let me hold her hand. We talked, and I found some common ground. I thought, ‘Wow! I can actually do this!’”

Myers graduated in 2014 with a bachelor’s degree in biomedical engineering. She stayed at Wright State for a master’s degree in anatomy, graduating in 2017. She enjoyed her experience with the master’s degree program, where she was a teaching assistant.

“I taught two semesters of undergraduate anatomy, and I enjoyed it,” she said. “I did lectures on the lab material and helped the students who worked on cadavers.”

Through the master’s program, she met several professors who encouraged her to apply to the Boonshoft School of Medicine.

“The professors at Wright State were the best,” she said. “One of my professors, Dr. Robert Putnam, mentored and encouraged me.”

During her M.D./Ph.D. studies, she wants to research mental illness and functional magnetic resonance imaging (fMRI). “The therapies we have for people suffering from mental illness sometimes have side effects,” she said. “Scientific imaging might help.”

She is grateful for the Boonshoft Scholars Scholarship. “I was surprised. But I am so grateful,” she said. “With the cost of medical school, this is a huge burden lifted off my shoulders.”