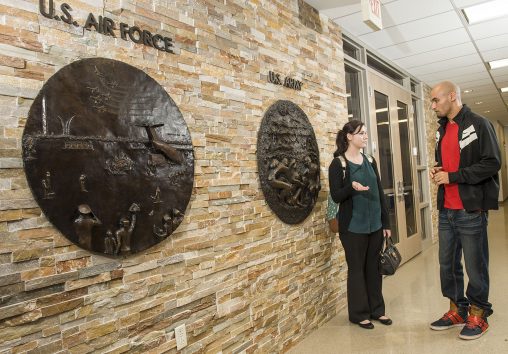 Wright State University is one of the best schools in the nation for veteran, active duty and military dependent students, according to a new ranking.

The Military Times: Best Colleges 2018 list for four-year universities ranks Wright State No. 80 out of 218 schools across the country. More than 600 schools submitted a 150-question survey to be considered for the distinction, which is a record number of applicants.

The only Ohio school to rank ahead of Wright State was Bowling Green State University, which placed 54th.

The top-ranked school was D’Youville College, of Buffalo, N.Y., followed by the University of South Florida in Tampa, and Armstrong State University in Savannah, Ga.

“Only the best made the cut,” said George Altman, the Military Times editor in charge of the rankings. “For the past eight years, we’ve seen colleges and universities consistently increasing their resources, revising their policies and improving their academic outcomes for military and veteran students. The Military Times Best Colleges rankings showcase the very best of these efforts.”

The Military Times noted that Wright State has 760 military-connected students and does a good job retaining them. It also noted that the university has a veterans center, and gave it four stars on GI Bill Gap coverage.

The university offers an array of resources to help veterans and other military-connected students transition to campus.

In fall 2014, Wright State opened a new Veteran and Military Center, a 4,500-square-foot area designed to provide a welcoming space on campus for veteran and military students. The VMC is designed to provide support services for veteran and military students, and create a space where they can relax and study together. It is considered a model for processing GI Bill benefits, according to the university.

The university’s Graduate School offers scholarships for Ohio National Guardsmen and military personnel, and civilian workers at Wright-Patterson Air Force Base who want to pursue graduate degrees. The College of Nursing and Health offers a Veterans Bachelor of Science in Nursing for veterans and members of the Air Force, Army and Navy.

The Military Times based its rankings on survey responses, and used data from the federal Education, Defense and Veterans Affairs departments to determine how schools stacked up across five categories: university culture, academic quality and outcomes, policies, student support, and cost and financial aid.

Read the original story at bizjournals.com