DDN story: Becoming Scrooge — what does it take to play Dickens’ iconic miser? 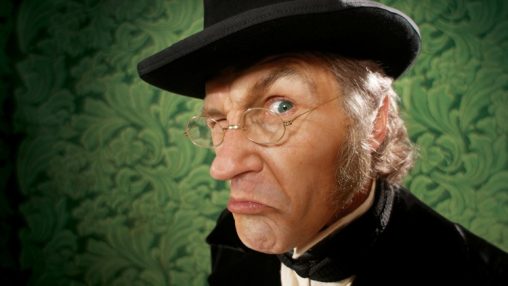 If you’re an actor in search of a juicy part, chances are you’ve had your eye on Ebenezer Scrooge. The iconic misanthrope has been a popular character since 1843 when author Charles Dickens penned a “ghostly little book” in which the miserly businessman learns the true lessons of the Christmas holiday.

Over the years variations of “A Christmas Carol” have been captured on stage and screen with the tightfisted, cold-hearted Mr. Scrooge portrayed by actors ranging from George C. Scott and Albert Finney to Jim Carrey and Tom Hanks. Among those bringing Scrooge to life in our area this holiday season are Wright State University acting professor Bruce Cromer and Atlanta-based actor Andy Harvey.

Cromer, who lives in Yellow Springs, has played Scrooge at the Cincinnati Playhouse in the Park for the past 13 years and is currently on stage at the Playhouse through Dec. 30. Harvey will appear in a Victoria Theatre Association production of “A Christmas Carol” staged by the Nebraska Theatre Caravan, the professional touring wing of the Omaha Community Playhouse. That show will be at the Victoria Theatre in downtown Dayton on Tuesday, Nov. 28 and Wednesday, Nov. 29.

Cincinnati Playhouse director Michael Haney has directed Cromer for many years and says he’s an ideal Scrooge. “He brings pathos, power, inventiveness and ultimately joy and humor to his characterization,” Haney says. “Bruce is tireless and never stops working on the role. His Scrooge is a marvel to behold, endearing himself to audience members of all ages and all levels of sophistication. His performance is frightening, funny and always true to Charles Dickens.”

Kimberly Faith Hickman, a director for the Nebraska production, says their current Scrooge — Andy Harvey — has an unusual way of looking at the world. “Andy is very open-minded and empathetic to others, which allows him to bring a sense of humanity to the roles that he chooses to play, particularly characters that are often seen as mean,” she explains. “He brings a genuine heart and soul to Ebenezer Scrooge, which allows the audience to discover that Scrooge isn’t really mean. He’s actually a man who experienced a multitude of losses, which resulted in a broken heart and loss of love for others. Because Andy has a huge heart, he is able to put Scrooge’s heart back together again, and the audience’s hearts as well.”

We talked to these two Scrooges about the fun and the challenges of this special role.

Q: What early memories do you have of Scrooge and the Dickens story?

Cromer: I loved Charles Dickens’ novels since the sixth grade. I saw the Alastair Sims movie version and the Mr. Magoo cartoon regularly with my family when I was growing up. I never dreamed that I would eventually play Ebenezer because I could never conceive of being that old, stingy and mean. I identified with Bob Cratchit and the ever-cheerful nephew, Fred.

Harvey: I was raised on the story. It was read aloud to me when I was young and I remember watching the George C. Scott version that was made for television.

Q: When did you first appear in a production of “A Christmas Carol”?

Cromer: I’ve appeared in three different versions. The first was at the Milwaukee Repertory Theater in 1989, where I played Young Scrooge. Then I played Charles Dickens for three years — and Marley’s Ghost and other characters — with the Human Race Theatre in the early ’90s at the Victoria. My wife, Carol, and our two sons, Charlie and Toby, were in that production as well. Ed Stern, the former artistic director of the Cincinnati Playhouse, asked me to audition for Young Scrooge in 1996. I landed the role of Bob Cratchit, which I played for eight years before becoming Scrooge.

Harvey: I started doing the show with the Nebraska company six years ago in the role of Jacob Marley. Last year I began playing Scrooge.

Q: What appealed to you about this role?

Cromer: The breadth of the role: two hours, never leaving the stage, with a fabulous arc of the character and such a demanding emotional, vocal and physical challenge. When the sweat is dripping and you’re ready to plop over, the Ghost of Christmas Yet To Come ushers you back for Christmas morning and then Ebenezer becomes like a child again — redeemed, joyous, bouncing all over the place, singing, doing funny little dances.

Harvey: I was a little bit afraid of Scrooge when I first saw the film. He’s so strong and very dark and then in the end is so joyful. I’ve always loved that transition; it goes hand-in-hand with the Christmas season. As an actor you always want to play a character that goes somewhere and you can’t have a bigger character arc than Scrooge. “The old sinner” starts off angry and sullen, only caring about money and then ends up giddy.

Q. What are the challenges of playing Scrooge?

Harvey: The challenge is going through that transition, trying to step into the character’s shoes and realistically take a look at his life. To remember things he hasn’t remembered in years and make the decision to change. The ghost gives him that option; otherwise he would die in torment. As a human, I know what it’s like to have evil and negative thoughts and feelings and as a Christian, I understand what redemption means. Our show doesn’t mention God but Scrooge goes through a conversion. It’s a very rewarding experience.

Cromer: We perform the show at the Playhouse eight to 10 times per week, 40-plus performances per year, and over 840 total shows by the end of this 2017 version. I’ve read all of Charles Dickens’ books, some twice, to get back into the Dickensian frame of mind, over the years. I watch all of the BBC adaptations of his works, read biographies, as well as annually enjoying his 1843 “ghostly little book.” While doing the run, I watch only comedy films, stay away from depressing news reports, drink lots of water, eat well, and sleep tons. You have to be in not only good physical and vocal health, you must be in a suitably happy state of mind: Scrooge has to go to dark, unhappy, searing places nightly, before the Spirits induce him to experience the joy of Christmas.

Q. How has your perception of the character changed over the years?

Cromer: I originally played Scrooge as more of a physically comic role, trying to make him lovable despite the harsh, cold, businesslike way he deals with humanity in the early scenes. But my maturity has made Ebenezer less humorous and more heartfelt. He’s slowed down as I’ve aged — I began playing him when I was 47 and am now 60. He’s gotten a bit more frightening, I think — and is really hit by the terrible mistakes of his life, when the Ghosts force him to relive those times. Few of us would like to step back into the moments when we might have done good and are powerless to change the harm we’ve inflicted on others.

Harvey: Audiences are always surprised to learn I am actually 30 years old but play Scrooge in his mid-60s. Make-up and a character voice go a long way. I start low and nasty and end up giddy and audiences like to take that journey with me.

Q. What lessons can we learn from Scrooge and this story?

Harvey: As a country and nation and world we’re going through very interesting times. A lot of this is not caring for your fellow man, being selfish. That’s such an important part of this play: choosing to live and experience life instead of shutting down and only thinking of No. 1. England was struggling in Dickens’ time. There was a lot of poverty and so the story rang true and it continues to ring true for every generation.

Cromer: Dickens and “A Christmas Carol” give us hope that we can change. We can peel off the layers of hurt and pain and emotional scars we’ve experienced and start again. We can look at how we might help, rather than harm, and have the courage to change. We can take advantage of the life we’ve got and aid others, not cause them to suffer. And we can find the fulfillment of kindness, family, caring. With the current climate of our nation struggling with hatred and divisiveness, Scrooge is an example of making amends, showing we are all connected in this world — and perhaps beyond it.